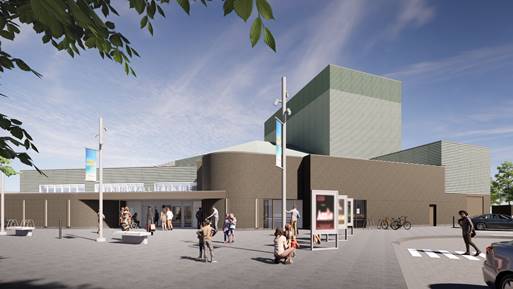 When COVID-19 is behind us and we can all return to the theatre, play aficionados will be able to take in a production at the freshly renovated Meadowvale Theatre in Mississauga.

The City recently announced that starting May 21, the theatre will close temporarily to undergo a facelift. The theatre is expected to reopen in summer 2022.

The theatre has already been closed to visitors for the past year in response to the COVID-19 pandemic and restrictions on indoor spaces.

The Meadowvale Theatre, which has not received any major upgrades since it opened in 1989, will be updated and improvements will be made regarding accessibility and energy efficiency. The City also says the renovation will expand access, create broader performing arts opportunities and provide new revenue options for the theatre. According to the City, the renovations will help transform the theatre into a more “modern, inspiring and accessible space.”

“Meadowvale Theatre is a vibrant hub that has been a part of Mississauga’s arts and culture scene for over 30 years,” said Mayor Bonnie Crombie in a statement.

“I’m so glad that the theatre is getting updated and enhanced, so that it can better serve theatregoers as a place to experience our vibrant performing arts community.”

“Meadowvale Theatre is an important part of the Ward 9 community and has been a cultural hub for all of Mississauga for more than three decades. It has offered affordable, accessible arts and cultural events to the community,” said Pat Saito, Ward 9 Councillor and member of the Meadowvale Theatre Community Advisory Panel, in a statement.

“Thank you to the community stakeholders who were part of the engagement process. We listened to your feedback and are excited to create a new space that will provide access to increased and diversified events, including educational workshops and performances.”

Renderings courtesy of The City of Mississauga