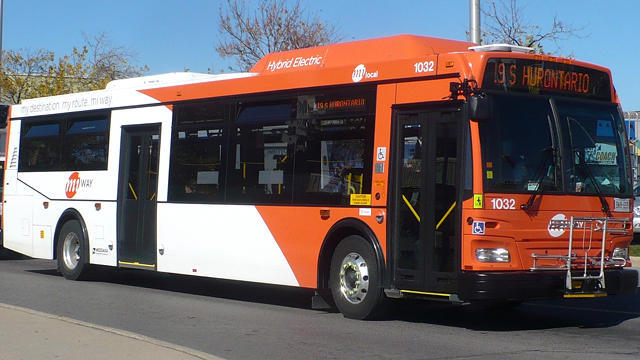 At the beginning of October, MiWay announced that it would be connecting riders with real-time updates starting Nov. 1 through its brand new Plan a Trip website. While the website is up and running and extremely useful, there’s another app that can be used to augment MiWays forward-thinking foray into transit technology.

The Transit App, which is the biggest public transport app in North America, recently adapted data from MiWay’s real-time program and incorporated it into its own program. While MiWay’s program is ideal for tracking your bus within Mississauga, Transit App is useful for riders planning commutes outside of the city. 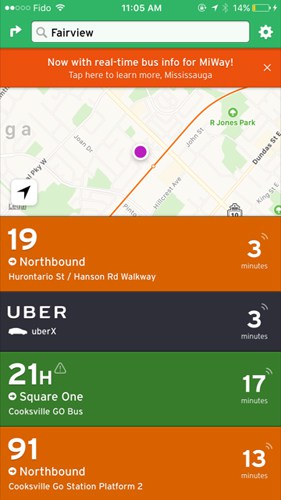 “You can do trip planning and put in your destination to find out the best route,” says Lauren Heller, director of communications with Transit App. “One of our goals is to encourage people not to own cars and used shared transportation methods. We have integrations with BikeShare Toronto. You can also book a car or call an Uber through the app.”

The app will guide you to the buses you need and provide real-time updates on when your ride will arrive. It also links to Bike Share Toronto and Uber, so you can grab a bike if you’re downtown or an Uber if you don’t have time to wait for a bus.

While the app has been available in Mississauga for some time, Heller says MiWay’s Plan a Trip program was a bit of a game changer for local commuters.

“The new real-time info in Mississauga, that’s something that makes a huge difference,” Heller says. “That’s reflected in the app. You can see the bus moving along the map. We’ve been in Toronto and Mississauga for a number of years and probably have hundreds of thousands of users in Toronto. Because our app is not specific to any transport agency, you can use it no matter what region you live in. If you commute from Hamilton to Toronto, you can see [data for] TTC and MiWay and GO.”

The app also offers a step by step navigation assistant and will prompt you to leave your home on time to get to your destination using public transit. The app can also notify you when you’re approaching your stop (which is great if you like to nap on the bus or train).

While Heller says the app fills in the gap for transit agencies who produce programs that are more difficult to navigate–after all, transit agencies are not, as she says, technology companies–she adds that Plan a Trip is still useful and that Transit is a good tool to use in conjunction with it.

“There’s no difference in terms of the info you’re getting, we’re not telling people not to use MiWay’s app,” she says. “But we have all the other agencies in the GTHA all combined together with Bike Share and Uber.”

The app can also be used in U.S. cities, along with France, the U.K., Germany, Italy and, believe it or not, Kenya.