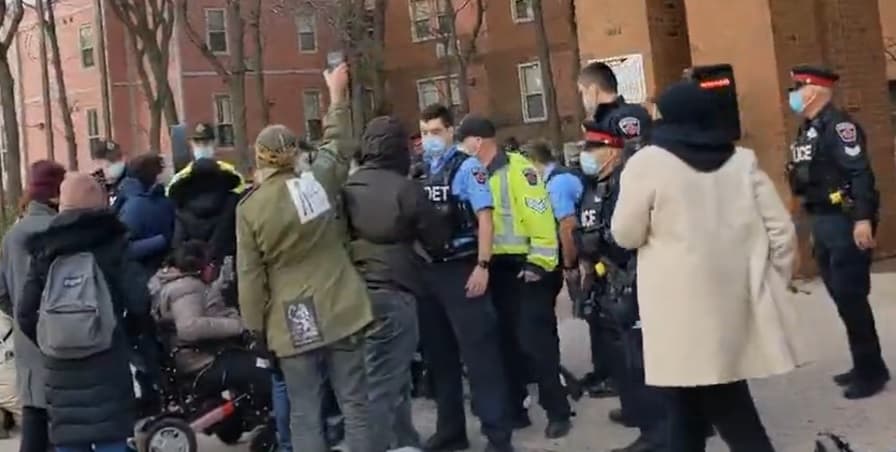 An investigation by Ontario’s police watchdog has been started in relation to a clash between Hamilton police and allies of unhoused people last Friday.

The Ontario Special Investigations Unit (SIU) has confirmed that 24-year-old Black woman reportedly suffered a serious injury when she was arrested outside the central police station.

Last Friday, following the arrest of Hamilton disability rights and social justice activist Sarah Jama in Beasley Park, where an encampment eviction was taking place, protesters went to the nearby Central Station on King William Street. Three more people were arrested there; all were released by early evening. All four people who were arrested are Black.

The SIU, which can invoke its mandate whenever a person is injured during interaction with a police officer, says it has assigned three investigators to the case. Its preliminary information reads as follows:

“On Friday (Nov. 26), there was a protest outside Hamilton Police Service’s central station. During the demonstration, there were interactions between protesters and officers.

“Officers arrested three people. One woman who was arrested reportedly sustained a serious injury during the course of her arrest.”

“The SIU is urging anyone who may have information in relation to the incident at the protest at the central station, including video or photos, to contact the lead investigator at 1-800-787-8529. They can also share information online at siu.on.ca/en/appeals.php.”

A witness assistance form can be accessed through siu.on.ca.

The confrontation in Beasley Park that continued at the central police station, was the second in three days that involved an encampment eviction.

Early last Wednesday (Nov. 24), an explosion and fire destroyed much of an encampment in J.C. Beemer Park at Wilson and Victoria streets. A police-assisted encampment teardown, which the City of Hamilton is legally allowed to do, began not long after. Volunteers of the Hamilton Encampment Support Network and residents responded with support of unhoused people whose possessions were destroyed, and violence ensued.

Leaders in Hamilton’s Black community will hold a press conference on Wednesday morning at 195 Ferguson Ave. N., not far from the station and the two parks.

“Black organizations, Black-led organizations, and Black residents are aware too well of the over-policing, surveillance and criminalization in their neighbours,” says the statement, which is signed by the Afro Canadian Caribbean Association, Hamilton Anti-Racism Resource and Hamilton Centre for Civic Inclusion.

Press Conference tomorrow at 10:30 AM #HamOnt

A GoFundMe campaign started in support of six activists who were arrested in relation to protests at Beemer and the Central police had raised $28,471 as of late Tuesday night. Over 450 people have donated.