Police search for witnesses to serious crash near Caledon 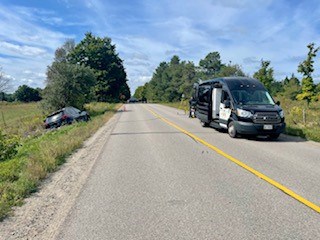 Emergency crews attended a serious crash on a stretch of 5 Sideroad in the town of Mono, approximately 26 kilometres north of Caledon, on Sept. 20, 2022. (Photo courtesy of the Dufferin OPP)

Police are looking to speak with a driver they believe may have witnessed a serious crash near Caledon that left one man in life-threatening condition.

Just before 7:00 a.m. on Tuesday 9Sept. 20), the Dufferin OPP say emergency crews were called to a stretch of 5 Sideroad in the town of Mono, approximately 26 kilometres north of Caledon.

Police say a male driver was injured in a single-vehicle collision, calling the crash “serious.”

The lone male driver suffered life-threatening injuries and was transported to a local hospital. He was later again transported by an Ornge ambulance to a trauma centre.

Police are looking to speak with anyone who may have seen the diver’s black Nissan SUV stopped on the shoulder of 5 Sideroad between the 4th and 5th Line sometime between 6:00 a.m. and 7:00 a.m. on Tuesday.

Investigators believe that the driver of a white pickup truck may have observed the SUV stopped on the shoulder.

Police say the white pickup truck is not involved in the investigation, but investigators would like to speak to the truck driver about what they may have seen.

The investigation is ongoing, and police are asking anyone who may have witnessed the collision to contact the Dufferin OPP 1-888-310-1122.

If you were a witness to the collision and wish to speak to victim services, you can reach the OPP’s Caledon/Dufferin Victim Services by calling 905-951-3838.