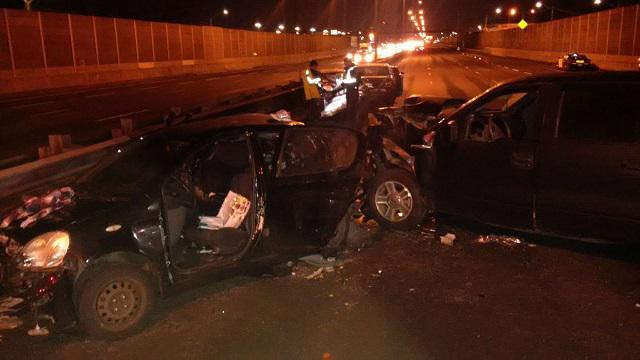 Police believe that road rage might have been a factor in a Mississauga collision that left one woman dead and another critically injured.

OPP Sgt. Kerry Schmidt says that on Saturday, Jan. 27 at approximately 10:00 p.m., five vehicles were involved in a collision on the Toronto-bound QEW, just east of Cawthra Rd. A total of 12 occupants were affected by the crash, with most sustaining minor injuries.

“This crash is being investigated by members of the OPP Port Credit detachment and detectives with the OPP crime unit,” Schmidt said in a video posted to social media.

Schmidt said that, prior to the crash, a vehicle from the middle lane went in front of a line of vehicles in the left lane and began to slow down.

“For some reason, there was some interaction and that vehicle began to slow. The lead vehicle behind it slowed as well to avoid a collision, which triggered a multi-vehicle chain reaction that claimed the life of Nicole Turcotte,” says Schmidt.

Schmidt said that witnesses described the suspect vehicle doing what is commonly called a “brake check,” which occurs when a vehicle cuts in front of traffic and slows down. This move is typically done in anger to retaliate against some perceived slight.

“As a result of those actions, we now have a fatal tragedy that was absolutely 100 per cent preventable,” says Schmidt.

“We have been watching and reviewing video cameras and surveillance footage from the area and we believe there was a vehicle similar to a Honda Civic, maybe a recently registered vehicle, with a license plate starting with the letters CE. We are still following up on tips from the public and witnesses.”

“We do not believe there was any contact made, but we believe that this person may or may not know what happened behind them. The vehicle was seen leaving the area and exiting the QEW in the area of the West Mall.”

Police are appealing to anyone who may have witnessed the crash, including the driver of a transport truck that was spotted driving close to the vehicles involved in the crash at the time of the incident.

“We would like to speak to and hear from that driver. We don’t know who it is or which company he or she was driving for. There are other witnesses who have not yet come forward and we would like to hear from anyone who can provide some answers.”

Schmidt says police are trying to get closure for the victim’s family.

“We are only trying to find answers for this family. [It is] absolutely disgusting that someone who is involved in a collision or who causes a collision would fail to remain at the scene and not report to police. We’re asking that person right now to come forward and speak with counsel or anyone you need to, and make yourself available to officers and investigators at the Port Credit OPP so that this collision [investigation] can come to a close.

The investigation into the crash is ongoing.