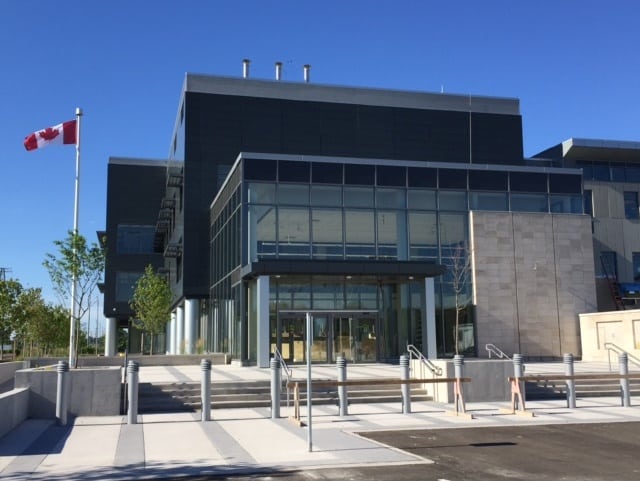 Niagara Police have released two new photos of a brazen bandit who robbed a St Catharines restaurant at gun-point on August 4 and then fled the scene on a bicycle.

Police say they were contacted at 2:20 pm with a report that The Fryin’ Guys restaurant at 155A Lake St. had been held up by an armed robber.

A lone man got away with an undisclosed amount of cash and fled the area on a two-wheeler prior to officers’ arrival. No staff members or customers were physically injured during the robbery.

The man was last seen riding the bicycle on Dufferin Street, eastbound toward York Street.

The suspect is described as a white man who is about five-foot-10 and 150 pounds, with a slender build. He has matted or dreadlocked mid-length light brown hair, and a tattoo on his right calf.

At the time of the robbery, he was wearing a blue baseball cap (backwards) with a bandanna underneath and a black face mask. He was also wearing a blue-grey long-sleeve button-down shirt, blue knee-length plaid shorts, red-and-white socks pulled up past the ankle, and yellow gloves. He also carried a black Nike backpack with a white swoosh on the back with a black side bag.

The bicycle has a black frame with a red marking or logo on the bottom bar and a white seat.

Anyone (residents or businesses) in the area with closed circuit security cameras, doorbell video cameras, or dash cameras are being asked to review their footage for suspicious activity for the period between 1:30 pm and 3:00 pm on August 4.

Anyone with information about this incident or the identity of the suspect can contact detectives at 905-688-4111, extension 1009504. Members of the public who wish to provide information anonymously can contact Crime Stoppers of Niagara online or by calling 1-800-222-8477.

(With files from Nathan Sager)