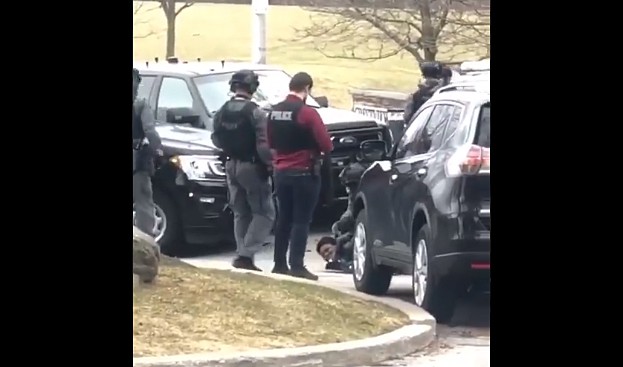 Peel Regional Police say it was a case of mistaken identity when a Brampton teenager was arrested in a high-risk takedown along the streets of Toronto last week.

But that response is not good enough for the family of the 17-year-old who was on his way to McDonald’s on March 31 when Peel and Toronto Police tactical units thought they were on the verge of capturing a wanted kidnapper.

The family says the teen went out to get some food when his car was surrounded by police who forced him off the road near Don Mills Rd. and Finch Ave. in Toronto.

“The police rammed his car and used a hammer to smash through the window to get at him,” said a friend of the teen. “They dragged him out of the car and put him face down on the ground and handcuffed him.

Today, Peel Police issued a statement saying they believed the teen was Kwami Garwood who is on the run following a kidnapping that occurred in Brampton days before. Garwood is wanted for several more crimes including murder.

“Due to the serious nature of the alleged offences, and that Garwood is believed to be armed and dangerous, Peel and Toronto police worked together to make what they believed to be a high-risk arrest. A plan was created with the Toronto Emergency Task Force to effect the arrest as quickly as possible while maintaining the safety of the public and the officers,” the police statement reads. ”Regrettably, the male in the vehicle was ultimately deemed not to be Mr. Garwood. He was subsequently taken to a local hospital as a precaution, where he was medically cleared.”

Family members say the teen does not resemble the real suspect other than he is a Black male.

They also object to the way police handled the investigation by not informing the boy’s family when it was determined they got the wrong guy. Instead, a family member says, hospital staff called his mother. The family believes the police are minimizing the incident and should have given more support to his needs and that of his family once they realized a mistake had been made.

Peel Police say they had a duty to act when they suspected the wanted man was in the vehicle and that the teenager did not receive serious injuries.

“We regret this mistake and the distress this has caused this young man and his family. Peel Police made initial contact with the family on that day. We have since made contact with a family representative to further discussions and offer our support,” the police statement reads. “While our officers were acting in good faith on credible information, it does not negate that this was a traumatic experience. An internal review is underway to examine the events leading to this incident”

Although the teen was released from custody he was charged by police with breaking a court ordered condition that prevents him driving because he was previously caught driving without a license.

The family says it deserves more accountability over the incident and an explanation on why the teen was being watched by police. They are determining what, if any, legal recourse they might take.