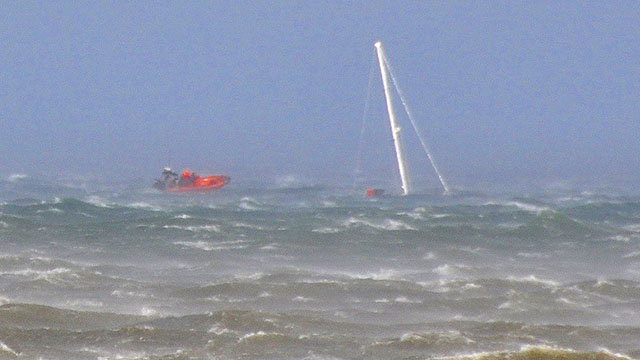 During the violent wind storm on Friday, May 4, the Peel Regional Police marine unit responded to a distress call at 4:02 p.m. for a sailboat that had experienced mechanical issues and was caught in the rough waters and high winds.

Police say the unit had to battle winds up to 96 km/h and waves in excess of three to four metres.

Constable Nicol boarded the distressed sailboat to secure a towline and complete the rescue.

Police say the vessel was towed approximately three kilometres into shallower water and some shelter closer to shore, but the winds increased dramatically and changed direction to offshore from out of the northwest.

Since police could no longer make any headway, the towed vessel had to be abandoned. The captain, who was alone, was rescued from his boat and the officer reboarded the marine vessel.

Everyone returned safely to the Port Credit harbour.

Police say the sailboat was left adrift without anchor as it could not be released. The coast guard was subsequently contacted regarding the abandoned boat, and a safety message was broadcast.

The Peel marine unit recovered the vessel the next day approximately 16 kilometres out towards Niagara.

There were no injuries sustained during the rescue.