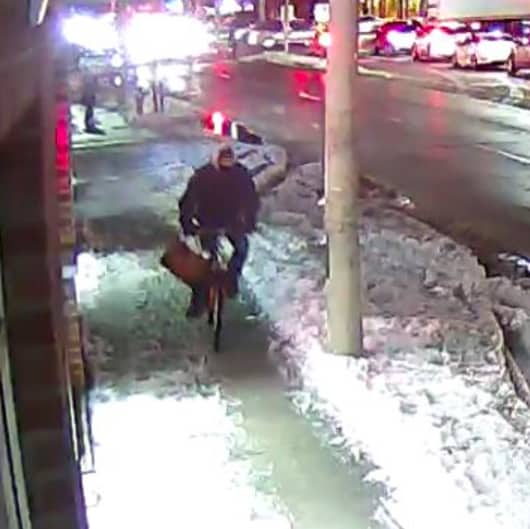 A suspected purse-snatcher is responsible for four incidents within two weeks in Mississauga, say Peel police, and they’re asking the public to help identify him.

That’s when a woman, 65, was standing on Dundas St. W., near Constitution Blvd., when a suspect grabbed her purse and fled eastbound on a bicycle along Dundas St.

The victim, a 42-year-old woman, had her purse grabbed from behind and was dragged for about 20 feet before releasing her handbag. She suffered minor injuries.

The third victim was approached from behind by a suspect on a bike on Feb. 15 at 9:30 p.m., this time in the Dundas St. and Queen Frederica Dr. area.

The suspect snatched her purse from her arm and continued riding westbound.

An 85-year-old woman was walking westbound on King St. on Feb. 26 at 3:35 p.m. when the man came up from behind and grabbed her purse, fleeing eastbound on a bicycle.

Residents are reminded to: