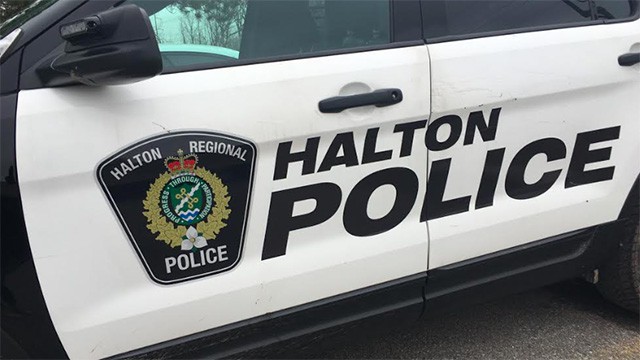 Halton Police officers chased a group of brazen young men linked to a recent rash of robberies in the Greater Toronto Area (GTA).

At 11:34 pm on Thursday August 30th, 2018 police responded to a robbery at the Royal Pizza located at 134 Guelph Street in the Town of Halton Hills. A suspect vehicle was provided to police by the complainant who also provided a direction of travel.

At 11:36 pm Halton Police uniform officers came across the suspect vehicle, a blue Honda Civic, on Mountainview Road South and Delrex Boulevard. Police attempted to box in the vehicle but were unsuccessful when the vehicle performed dangerous and evasive maneuvers. A pursuit ensued and the suspect vehicle attempted to make contact with a police vehicle. The pursuit was terminated at 11:40pm for public safety reasons.

Nothing was taken and no persons were injured in the attempted robbery. Four suspects entered the pizza store wearing masks and asked the victim to open the cash register. There were no weapons seen.  The robbery was interrupted by other patrons attending the store. The four suspects are described as teenage males, wearing masks and dark clothing.

It is believed that these suspects and the suspect vehicle are involved in a recent rash of robberies in the GTA.

The suspect vehicle involved in these occurrences is a blue 2005 Honda Civic stolen out of Toronto. The licence plate is BZXV365. If you see this vehicle contact police immediately.

“These incidents are particularly disturbing given the reported young age of the perpetrators, the level of violence and their disregard for the safety of others,” said Detective Sergeant Dave Costantini 1 District Criminal Investigations Bureau. “We are actively working with our neighbouring services to bring these individuals to justice. I encourage anyone who has information as to the whereabouts of these individuals to contact your local police service or anonymously via your local crime stoppers.”

Anybody who may have additional information pertaining to this incident is asked to contact Detective Constable Craig Slade of the 1 District Criminal Investigations Bureau at 905-825-4747 ext. 2456.
Tips can also be submitted to Crime Stoppers “See something? Hear something? Know something? Contact Crime Stoppers” at 1-800-222-8477 (TIPS) or through the web at www.haltoncrimestoppers.ca