Residents of Mississauga, Brampton, Oakville and other parts of the GTA have an opportunity to have their say as Pearson Airport officials look to change the flight paths of incoming aircraft in an effort to reduce noise and pollution.

And a number of online public meetings are still to come, including one slated for tomorrow (Nov. 30) at 5 p.m. for residents of southwest Mississauga and Oakville.

A general session open to all residents is planned for Dec. 7, also at 5 p.m.

But where exactly do the scheduled flight paths—both incoming and outgoing from Pearson—take planes as they fly above GTA homes, businesses and highways?

Several NAV Canada maps below may be of some help in that regard. They show current and planned flight paths around the airport in addition to an estimated number of daily flight arrivals, both current and future.

Another map people might find interesting is an almost-live tracking map showing all flights currently in the sky around Pearson Airport, where they’re headed and their altitude as they climb or descend. 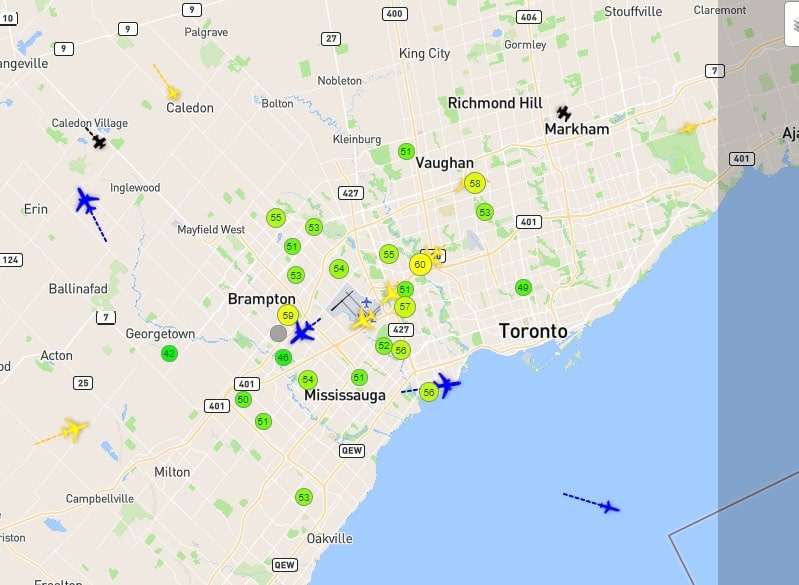 This is a still taken from WebTrak, which Pearson Airport uses to let people see what planes are in the sky at any given time of day. This particular image shows a near-real time snapshot of aircraft activity late afternoon on Nov. 29, 2021.

NAV Canada and the GTAA are planning new approach procedures for Pearson’s Runway 05, one of three east-west landing strips at the airport.

The new procedures will allow aircraft to line up with the runway sooner than when using a typical/current procedure. As a result, officials say, aircraft will fly a shorter distance and consume less fuel, therefore reducing greenhouse gas emissions.

They will also be operating on a continuous descent operations profile, which enables an aircraft to descend on a quieter reduced engine setting, airport officials say.

NAV Canada says after conducting noise tests to better understand the noise footprint associated with proposed procedures, results show that under the new/proposed plan, 59,000 fewer residents will be overflown at noise levels above 60 decibels (dB). 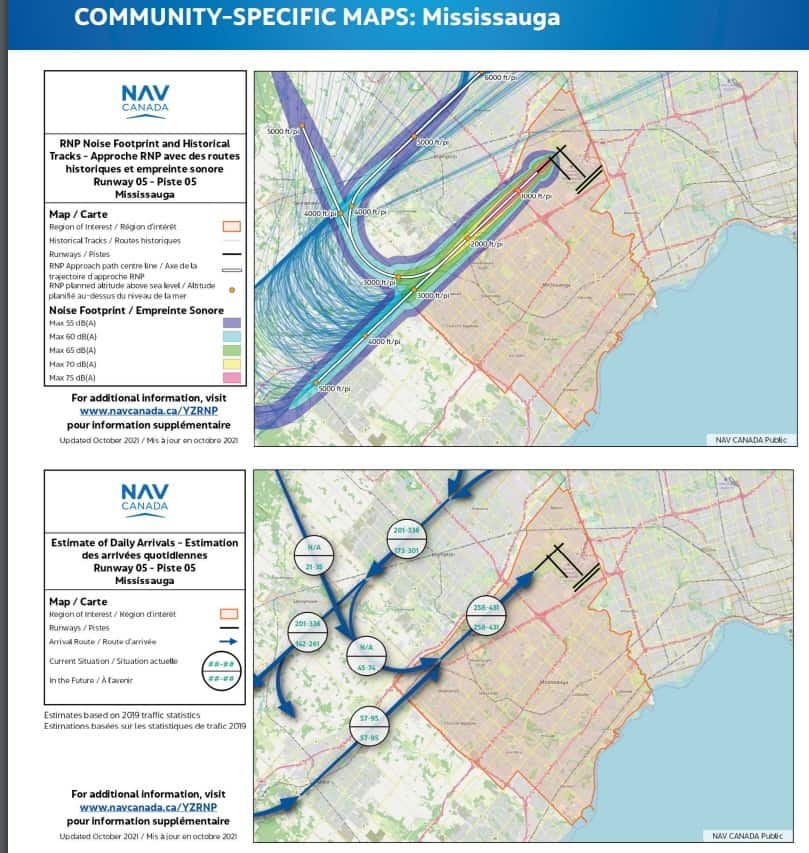 Sixty decibels, considered safe, is about the sound associated with a normal conversation or an air conditioner. Moving up the scale, 70 dB (washing machine, dishwasher) may cause annoyance and 80-85 dB (city traffic as heard from inside the car) will very likely cause annoyance. 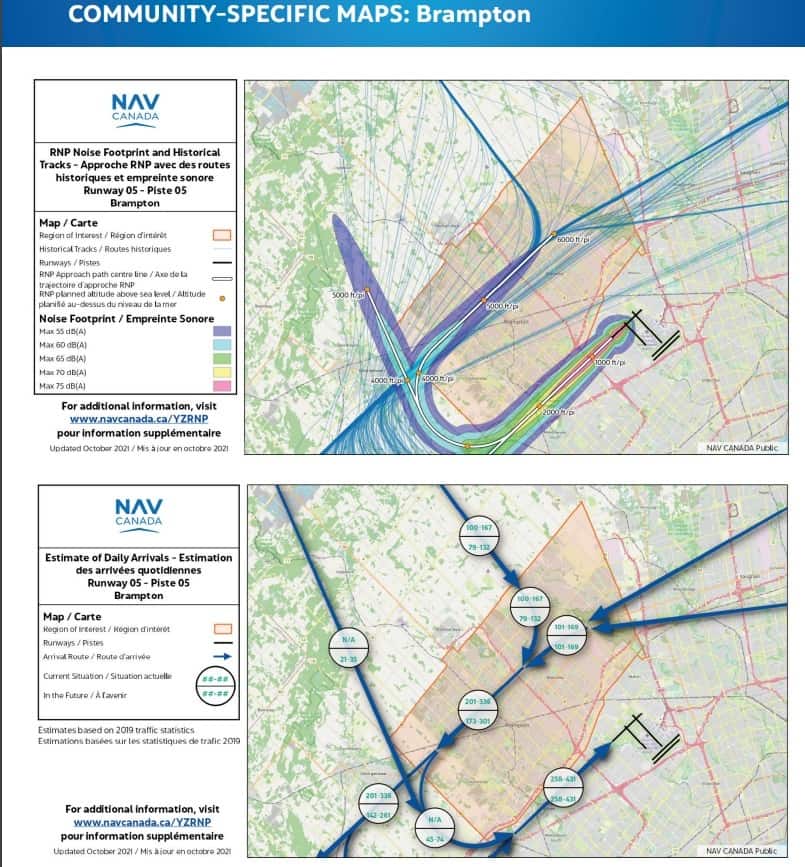 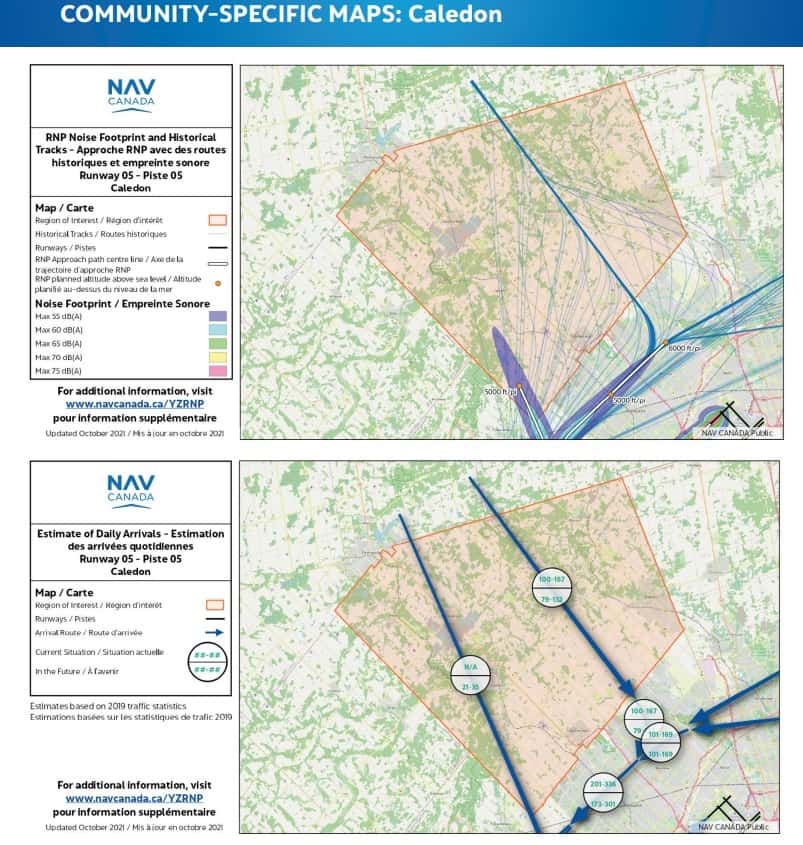