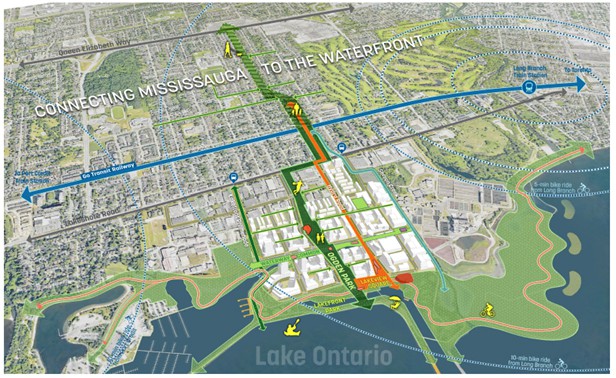 While Mississauga is no stranger to new development (it has happily welcomed the condo boom, after all) it’s going above and beyond by moving forward on a number of monumental placemaking projects that will fundamentally change the look, feel and appeal of the city.

One huge project that the city is tackling is the grand-scale redevelopment of the Lakeview waterfront area, and city council just endorsed the Lakeview Waterfront Development Master Plan.

The plan sets out the framework for the development of the 177-acre site, which was once home to the Lakeview Power Generating Station lands.

The new neighbourhood, which will be known as Lakeview Village, is located in south-east Mississauga on Lake Ontario, approximately 3.8 kilometres east of Port Credit, near the western limits of Toronto.

The site is well-connected to major roads and highways, with Lakeshore Road East forming the north boundary of the site. The neighbourhood also boasts convenient access to both the QEW and Highway 427.

Today’s approval of the master plan is the latest step in the multi-year project which began with Inspiration Lakeview consultations in 2010.

The city can now review submitted development applications and can consider amendments to the official plan and zoning bylaw.

The city says public consultation will continue throughout the process.

“I am pleased that we are one step closer to creating liveable, walkable communities connecting the lakeshore from east to west,” said Mayor Bonnie Crombie.

“The transformation of our waterfront will drive tourism, foster innovation, spur economic growth and attract a new generation to Mississauga. Few cities in the world have the opportunity to develop 250 acres of their waterfront. The potential here is enormous.  As we continue to work together, our vision to create a world-class waterfront will become a reality.”

Judging from the plan, the community will be quite vibrant.

According to the plan, the new neighbourhood will feature housing, a hydro gateway, Ogden Park, an Artscape makerspace/community centre, a school, a waterway common, the Serson Innovation Corridor, the Marina District, Lakeview Square, Lakefront Park, a cultural institution, an outdoor event/performance space and a pier.

The Lakeview Village master plan has conveyed 67 acres of land to the city for parks, open space, cultural, and institutional uses. The conveyed lands are primarily public open space, including all of Lakefront Park, adjacent portions of Ogden Park, and the plaza within Lakeview Square. A majority of the Innovation Corridor is also within the conveyed lands, including the proposed District Energy hub.

“We wanted to ensure this master plan was in place before we considered any official plan amendments. The development of the Master Plan allowed us to more closely examine the built form and density. We were also able to more fully engage with the community, than what would have been possible under the original Official Plan process.”

Following presentations of earlier versions of the master plan to Planning and Development Committee (PDC) on April 29 and June 24, Lakeview Community Partners Limited met with city staff and the Lakeview Community Advisory Panel to incorporate feedback received and revise the plan.

The Lakeview Waterfront is one of Mississauga’s three key redevelopment waterfront projects along with Port Credit West Village and 1 Port Street.