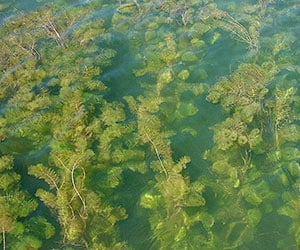 The City of Pickering have joined forces with the Pickering Harbour Company (PHC) to wage war on Eurasian water-milfoil weed on Frenchman’s Bay.

The fast-growing invasive weed – also known as the ‘Zombie Plant’ – can reduce biodiversity and water quality and poses a hazard to those using the Bay for recreational watercraft, sports and leisure, the City declared.

The City and PHC have been working to develop a partnership agreement that outlines project details such as the subject areas, methodology, and costs. The pilot project work begins next week and take approximately 4-6 weeks to complete, dependent on weather and bay conditions.

In the following weeks, cutting will take place in areas north of these channels towards Bruce Handscomb Memorial Park on the west, and Progress Frenchman’s Bay East Park on the east. The project will include cutting a total of approximately 5 acres (2 hectares) and will be approximately 20 metres (66 feet) wide.

Public inquiries and feedback can be directed to the City of Pickering’s Customer Care Centre at [email protected] or 905.683.7575.