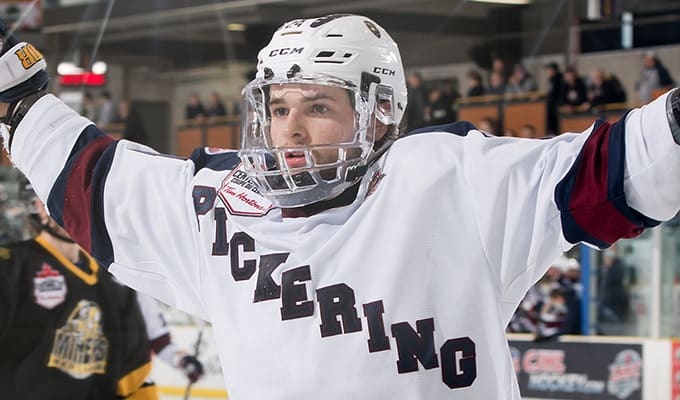 Zachary Roy and the Cardiac ‘Cats used up about 8¾ lives, but lived to play at least one more day.

Cael Cavallin sent the Pickering Panthers to the Centennial Cup semifinal when his fluttering point shot nestled into the Flin Flon Bombers’ net for a 3-2 double-overtime comeback victory in Estevan, Sask., on Friday. The goal capped a national Junior A hockey quarterfinal that included 45 saves from Roy and his teammates scrapping out two shorthanded goals — with Pickering-raised defenceman Matthew Altomare creating both — to forge the comeback. Dustin Hutton, who is also one of the Panthers’ eight 20-year-old overage players, had one of the tallies.

The result sets up a semifinal on Saturday between the Panthers and Dauphin Kings, the Manitoba champions who finished first in Group B during pool play. The Panthers were second in Group A. On HockeyCanada.ca, Dauphin is listed as the home team in the 9:30 p.m. semifinal.

The Brooks Bandits are due to play in the 6 p.m. final. Brooks will apparently face the winner of the Longueuil-Summerside quarterfinal, which was later on Friday.

The semifinals will be streamed free at HockeyCanada.ca. Meantime, TSN and RDS will carry the championship game at 6 p.m. on Sunday.

It was not happenstance that the Panthers’ comeback was fuelled by two shorthanded goals, since their penalty killing units had a busy night. Flin Flon went 2-for-8 on the power play, with Jacob Vockler scoring both goals. Pickering went 0-for-4 on the PP.

The seeming disparity in penalties factored into the Panthers struggling to build momentum through the opening 38 minutes or so. As well, the second goal by Vockler was a pinball tally where his pass was tipped by Panthers captain Brendan Tomilson, ricocheted upward and past a screened Roy.

Just 1:12 from the end of the second, though, Altomare made an inspired play to get the Panthers off the deck. The defenceman checked Flin Flon’s Xavier Lapointe behind the Bombers net, stole the puck and started a tic-tac-toe passing play from Ethan Doyle to a finishing Hutton.

With 7:20 left, Altomare got a shorthanded break and surprised Bombers goalie Cal Schell, a Burlington native, with a bad-angle shot. The puck hit Schell in the back and went in for the equalizer.

During the first overtime, Roy made a tough pad save on Flin Flon’s Drew Kuzma to keep his team extant. The Panthers also had to kill off a penalty that carried over into the second sudden-victory session.

Pickering finished second in Group A with eight points from four games. (The Centennial Cup uses the international 3-2-1 points system, with an extra point in the standings for a win in regulation time.) Flin Flon earned seven points to slot into third in Group B.

Schell, who is headed to Oswego State in U.S. college hockey for next season, had 34 saves for Flin Flon.