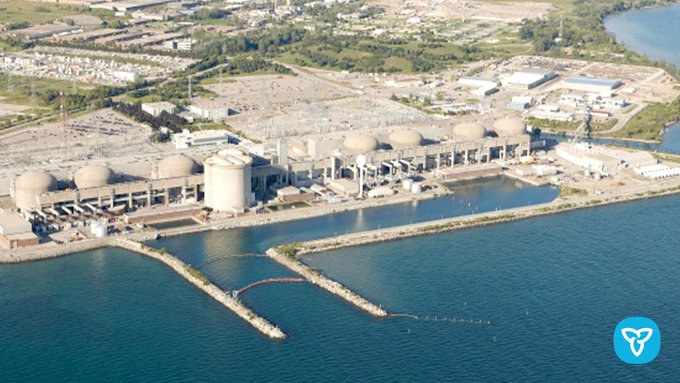 The end of the line is coming soon for the Pickering Nuclear Generating Station.

For some, who fear the aging plant may be headed for a Fukashima-like meltdown, the end cannot come fast enough.

For others, who worry about how Canadians are to replace the clean energy produced at the plant, the demise of the station will come at great cost to the environment.

The Ontario Government has ordered station operator Ontario Power Generation (OPG) to shut down the plant, which first opened in 1971. Units 1 and 4 scheduled for 2024 and Units 5 to 8 will be shuttered the following year. After commercial operations end, the station will be placed in a safe storage state and eventually decommissioned, beginning in 2028.

The Ontario Clean Air Alliance wants the shutdown closer to right now than three years from now and called for an interim moratorium on the Station’s operation last March until it is proven there is no threat to public safety.

Two of Pickering’s eight reactors have already been decommissioned because of age and the Alliance fears for a repeat of Japan’s Fukashima nuclear plant, which suffered a meltdown in 2011 as a result of the Tohuku earthquake and tsunami that led to the evacuation of 154,000 people.

The alliance’s request was denied.

On the other side of the issue is a growing number of people asking the provincial government to re-think the decision to shutter the plant, citing environmental concerns with switching from nuclear energy to carbon-producing natural gas.

Dr. Chris Keefer, a Toronto-bases emergency physician, is one of the leaders in a campaign – savepickering.ca – to re-furbish the reactors at Pickering instead of shuttering them, especially if Canada plans on meeting the Net Zero global climate change thresholds.

“Net Zero needs Pickering. You can’t shut down 3,100 megawatts of carbon-free energy and replace it with gas,” he said. “OPG’s climate credibility hinges on re-building/re-furbishing Pickering.”

Another active campaigner in the fight to save Pickering is Christopher Adlam, a network engineer who is “passionate” about nuclear energy.

Adlam believes political support for nuclear power has been lacking for at least a decade, which is why Pickering’s re-furbishing project died. “By the time those decisions were made the government of the day had already embarked on the wind and solar sideshow,” he said.

“If we truly believe that there is a climate emergency and that we must drastically reduce our emissions and embark on a large-scale plan of electrification, taking a giant step back by retiring Pickering flies in the face of it,” Adlam claimed. “Either the emergency is real, and it’s all hands on deck, or it’s really not an emergency and we’ll just burn massively more gas because it’s not really that big a deal for Ontario’s grid to go back to fossil fuels.”

A great day marching for our future and our climate! Thanks for organizing, @CanadiansEnergy https://t.co/14K44cdrXP pic.twitter.com/9GN2QJ8pBl

The City of Pickering and the Region of Durham – along with OPG – have already come to terms with the idea that the Pickering nuclear plant is never coming back online and have partnered on a financial, economic and social impact study on the decommissioning project, the largest of its kind in Canadian history.

Durham Chairman John Henry preferred to look back at the economic impact the plant has had over the past 50 years while looking ahead to the skilled jobs that will be created through the decommissioning project.

“The end of electricity generation at PNGS will launch a new chapter for our Region,” said Henry. “Equipped with the findings of this joint study, we can better understand the steps ahead and prepare to meet the coming challenges and opportunities, while engaging our community.”

The study, awarded to AECOM Canada earlier this year, will provide a “thorough understanding of decommissioning impacts and economic opportunities,” as well as recommendations for “maximizing opportunities to stimulate research, technology development, and innovation.”

The end of the Pickering plant will still leave Durham Region with one nuclear power plant, the much newer (1993) Darlington plant near Bowmanville. Darlington’s license expires in 2025, right around the time its $12.8 billion refurbishment program is expected to be complete.

The program should allow for safe operation of the plant until 2055.

Keefer, who has watched the savepickering.ca campaign he founded grow over the past few months, hasn’t given up hope for Pickering just yet, though he has resorted to Yogi Berra-isms in his dreams of success.

“It ain’t over ‘til it’s over,” he said on Twitter recently.

It should be noted, however, that Berra’s New York Mets, who were 9 ½ games out of the playoffs when the legendary player and manager uttered those famous words in 1973, went on to win their division and go all the way to the World Series.

To quote another of Yogi’s legendary malapropisms, “it could be deja-vu all over again.”