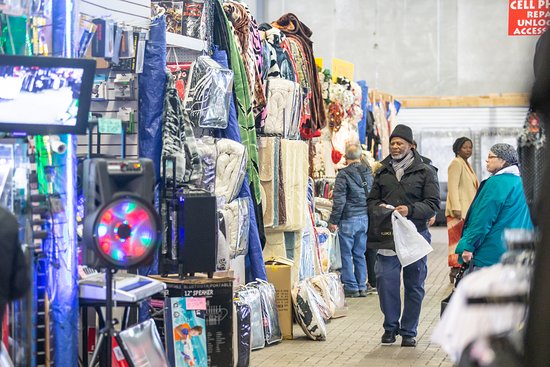 After 47 years in business as Canada’s “largest multicultural market” and half a pandemic out of business, the Pickering Markets are making a triumphant return this fall.

The giant flea market, which hosted 610 booths every weekend in a 22,000 sq. ft. warehouse on Squires Beach Road in Pickering for nearly half a century, will re-open October 1 in the old Zellers location at the junction of First Avenue and Simcoe Street in Oshawa.

Pickering Market opened in 1973 and was a weekend shopping mainstay for the eastern GTA until the Pandemic struck last year. They managed to re-open in November after the first lockdown, but with a second lockdown on the horizon, they shut their doors “permanently” on Boxing Day, 2020.

In an Instagram post that day, the family-owned business thanked their customers, vendors, and staff for their patronage over the years, but said they were closing “for good.”

“COVID-19 has taken its toll on so many small businesses and we were no exception to its cruel effects. We feel for every single business that has or is currently going through these tough decisions. For us, this was not a decision that came lightly.”

On July 16 they teased a return and on July 21 they returned to social media with the message “Secret, Secret, We’ve got a secret! We can’t wait to welcome you to our new home in the heart of Oshawa!”

The new location will likely be considerably downsized from their former warehouse in Pickering, though the proposed square footage of the new facility has not yet been announced.

The news will be welcomed by Oshawa residents, who watched hopefully when Target blew into Canada a decade ago, buying up Zellers stores in their bid to take on Walmart.

The company took one look at the Zellers site on Simcoe Street South and said no thanks, which was another blow to a neighbourhood that had already felt the loss of the giant Knob Hills Farms location and Pittsburgh Paint locations down the street in the previous ten years.

A new GO Station is slated to be built at the Knob Hills site in the next few years, which offers hope for the future of the area.

Target’s ill-fated Canadian adventure ended in shame when the company shut down all its stores in 2015, just two years after opening their first location.

The company lost $2.1 billion in those two years and was termed a “spectacular failure” (CBC), an “unmitigated disaster” (Macleans), and “a gold standard case study in what retailers should not do when they enter a new market” (Financial Post).