Canadian national team defender Jayde Riviere, the pride of both Pickering and Markham, is headed to England to win the hearts of one the world’s most famous football towns after signing a two-and-a-half year deal with storied Manchester United.

“A dream come true and another chapter in my journey,” Riviere posted on her socials Sunday. “So excited to be a Red.”

Riviere, who turned 22 Sunday, has already been capped 36 times by Canada, including four games during Canada’s gold medal run at the 2020 Olympic Games in Tokyo held in 2021.

Born in Markham, Riviere grew up in Pickering and played for West Rouge and Pickering soccer clubs before moving back to Markham when she was 13. She played for the Michigan Wolverines from 2019-2022, helping the school capture the Big Ten title in 2021.

Despite being touted as a first round pick and with interest from several European clubs, Riviere resisted calls to turn pro last year and declare for the NWSL draft and instead remained as an amateur. She signed her deal with Manchester United in the English Women’s Super League on her birthday.

Calling herself a “huge Manchester United fan,” Riviere was overjoyed to be joining United. I feel like excited is an understatement,” she said. “It’s been quite a journey and it’s kind of destiny.”

“This is my dream club.” 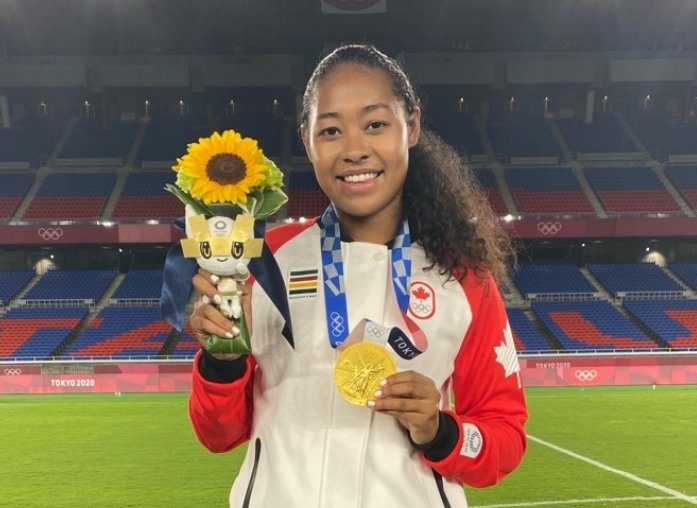 Riviere, who is currently nursing an injury that may delay her debut in England, represented Canada at multiple youth levels before earning her first senior cap at 16 in 2017. With a rocket of a right foot and pace for days, she has been a favourite of head coach Bev Priestman for the past three years, appearing in three games in the 2019 World Cup in France and was on the pitch when Canada beat Sweden on penalties in the gold medal final in Tokyo.

She has one career goal for the senior team.

A dream come true and another chapter in my journey! SO EXCITED TO BE A RED ❤️ https://t.co/w68Xw8vB3F