PHOTOS: Two-way, all-day service in the works for GO Train line that runs through Mississauga 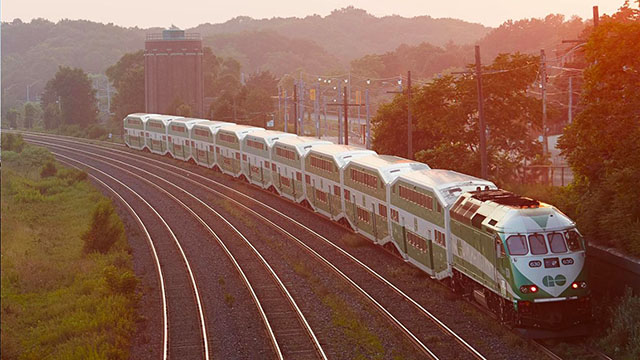 The province says two-way, all-day service on the Kitchener GO Train line, which runs from Union Station to Kitchener and stops in Mississauga’s Malton neighbourhood, is closer than before.

The Kitchener line also boasts stops in Brampton and Georgetown.

On Feb 11, the province announced that it has completed excavation of the second of two tunnels under Highways 401 and 409.

In a blog post, Metrolinx says that since March 2020, heavy machinery has been digging through rock and debris in the second tunnel.

According to Metrolinx, the transit agency is building a twin tunnel structure underneath 21 live lanes of traffic. When complete, the tunnels will accommodate future track, bringing more frequent, two-way, all-day train service to the line–something GTA leaders, including Mississauga Mayor Bonnie Crombie, have been calling for. The tunnel excavator moving into position to start the final phase of tunnel two 100 per cent excavation. (Metrolinx photo)

Crombie has also been calling on higher levels of government to bring two-way, all-day service to the Milton line to complete the development of Regional Express Rail (RER).

In a recent report, the city said that it continues to encourage the relocation of heavy rail freight traffic from the Milton and Kitchener GO Rail lines to a proposed bypass rail line adjacent to Highway 407 (also known as the “missing link”).

“It is only through the construction of the missing link that the RER will be able to move forward,” the city’s report says.

In a news release, the province said that track, signaling, and communications infrastructure will be installed under a separate contract. Substantial completion for the 401 and 409 Rail Tunnel Project is expected to be reached in the second half of 2021.

“We are delivering on our commitment to bring fast, frequent rail service to Kitchener-Waterloo, Brampton, Mississauga, and Toronto,” said Kinga Surma, Associate Minister of Transportation (GTA), in a statement.

“By making these significant infrastructure investments, we will connect more people to jobs and improve passenger convenience, while increasing access to Ontario’s fastest-growing urban cities along the Toronto-Waterloo Innovation Corridor and beyond.” A mini excavator clearing the finer excavator material and preparing the area for the tunnel excavator. (Metrolinx photo)

The province says this project is one of more than 20 major initiatives currently under construction to support the province’s GO Expansion program that will transform GO rail into a two-way, all-day rapid transit service every 15 minutes on core segments of the network.

“GO Expansion will transform the transportation network in the Greater Golden Horseshoe, allowing for more frequent travel across the region,” said Phil Verster, President and CEO of Metrolinx, in a statement.

“This announcement and the work on the Kitchener line is a significant milestone which will eventually help get more people out of their cars and onto public transit, leading to a better quality of life for many people.”

The province says that each rail tunnel under Highways 401 and 409 is approximately 180 metres in length, or about 360 metres when combined, with an excavation that is 11 metres high by 9 metres wide.

Both tunnels involved the removal of approximately 70,000 cubic metres of material.

Toronto Tunnel Partners is the project consortium constructing the twin tunnel structure. The value of the contract is approximately $116.9 million.

All photos courtesy of Metrolinx