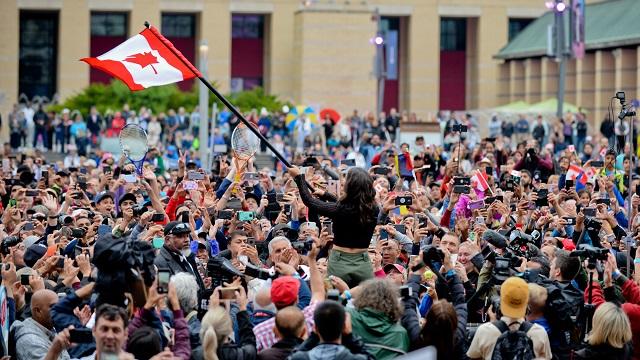 Thousands of fans from all over came out to attend the She the North rally, which took place Sunday afternoon at Celebration Square.

The rally was held to celebrate the massive accomplishments of Mississauga tennis star Bianca Andreescu, who recently became the first Canadian to ever win a Grand Slam singles title after winning the US Open 2019.

The @biancaandreescu_ rally has begun in her home town of #Mississauga! #shethenorth

At the event, Mayor Bonnie Crombie presented Andreescu with a Key to the City and unveiled the street sign of a Mississauga street to be named in her honour — Andreescu way.

“The City of Mississauga, its residents and all of Canada are so incredibly proud of our local hometown champion, Bianca Andreescu,” said Crombie.

“Presenting her with the City’s highest honour is our way of saying thank you on behalf of all Mississauga residents. She has inspired young athletes to play tennis or chase their dreams and has done so with such determination, grace and humility.”

Toronto Mayor John Tory was also on stage, and he has since proclaimed Monday, Sept. 16 as Bianca Andreescu Day in Toronto.

To congratulate her on her amazing accomplishments at the #USOpen, and to thank her for being an inspiration to young athletes across the city, I’m pleased to proclaim today as Bianca Andreescu Day in the @CityofToronto. #SheTheNorth #SheTheChamp #BiancaRising pic.twitter.com/IuGrjvItiK

“With all eyes set on Andreescu’s meteoric rise through the ranks over the past year, the sport continues to grow rapidly across Canada,” said Michael Downey, CEO of Tennis Canada. “What is most important is not what we have done for her but how Bianca is helping grow our sport in Canada both on and off-court. She is truly inspiring the next generation of tennis players to pick up a racquet.”

Following her victory at the US Open 2019, Bianca Andreescu has jumped to fifth in the world standings.