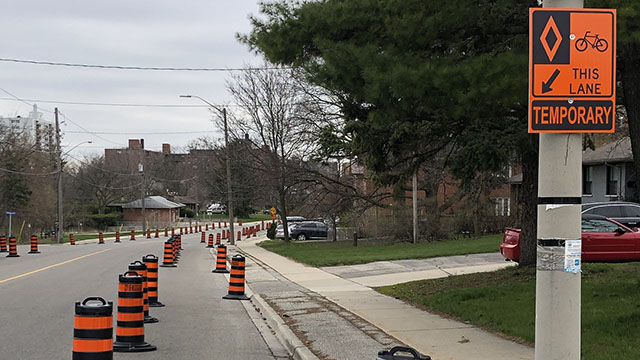 With fewer people driving due to the ongoing COVID-19 pandemic, the City of Mississauga is taking advantage of the lull in traffic to make life a little easier for cyclists.

Earlier this month, city council started talking about the possibility of temporarily converting live lanes (or at least part of live lanes) of traffic into bicycle lanes.

Now, the first temporary bike lanes have been installed on King St. in Cooksville.

The lane opened on April 24.

“Our first temporary bike lane has opened today on King St. in Cooksville to be used by local cyclists in the Cooksville area,” the city wrote on Twitter.

More bike lanes could open in the not-too-distant future.

On April 14, Ward 9 Councillor Pat Saito indicated that some streets in her ward were being looked at as candidates for temporary bike lanes.

“Watch for Glen Erin Drive from Britannia to Aquitaine being reduced to one lane to add space for cyclists and pedestrians during the state of emergency,” Saito wrote in a tweet.

“Working on Thomas Street. Other streets in the city being reviewed.”

Photos courtesy of the City of Mississauga