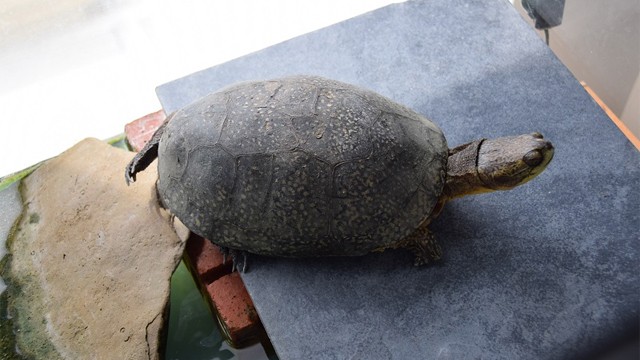 Even if you know a lot about Peel police, you probably weren’t aware that the force’s Marine Unit rescued and kept a turtle named Stumpy for over 20 years.

Even if you know a lot about Peel police, you probably weren’t aware that the force’s Marine Unit rescued and kept a turtle named Stumpy for over 20 years.

Stumpy, a female Blanding’s Turtle, was rescued from a hungry raccoon over two decades ago by members of Peel Regional Police Marine Unit, a unit established in 1974 that patrols waterways and looks for lost or missing vessels (turtle rescues are most likely an occasional but very heartwarming bonus). Stumpy has been living with members in the marine office ever since.

As for the name, Peel police Const. Bally Saini revealed that Stumpy was so named because she lost her front flippers in the attack.

According to the Ontario government, the Blanding’s Turtle is considered a threatened species–meaning steps must be taken to address the issues prompting its declining numbers. As far as appearance go, the turtle is typically medium-sized and often identified by its bright yellow throat and chin. It also boasts a domed shell that looks like an army helmet.

The turtle typically lives in shallow water and is often spotted in Southern Ontario.

Because the species is threatened, the marine unit decided it was time to Stumpy to begin living with other turtles–especially since she’s reached breeding age and can start a little reptilian family of her own.

On Wednesday, Jan. 25, the marine unit took Stumpy to her new home at The Toronto Zoo, where she will meet and live with other turtles at the turtle sanctuary.

You can see some photos of Stumpy being transported to her new home below.