There are few things more polarizing than new developments—especially residential ones.

Last month, insauga.com reported on another new development coming to Mississauga in the Port Credit area. This development application requested permission to build a 15-storey apartment building with 207 units and three levels of underground parking on the south side of Park Street East and east of Stavebank Road. 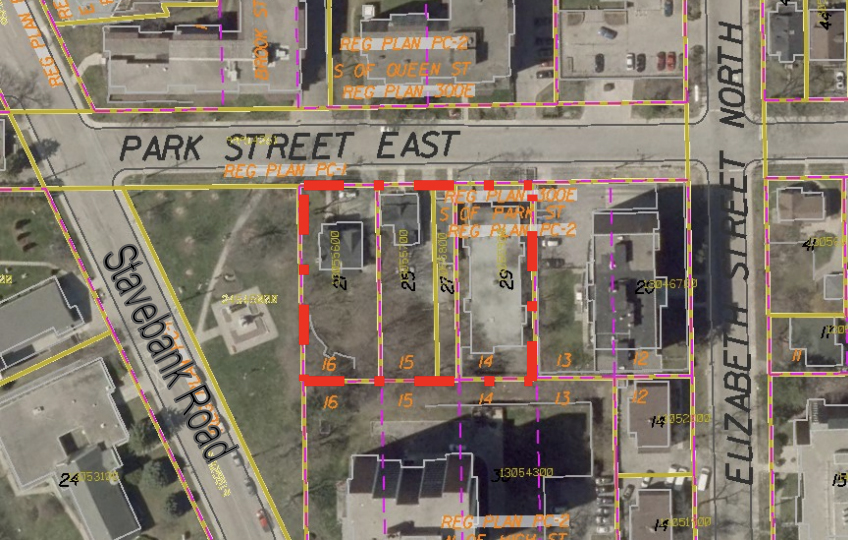 The proposed development would be next to the heritage designated Vimy Park, where the Port Credit Cenotaph is also located: 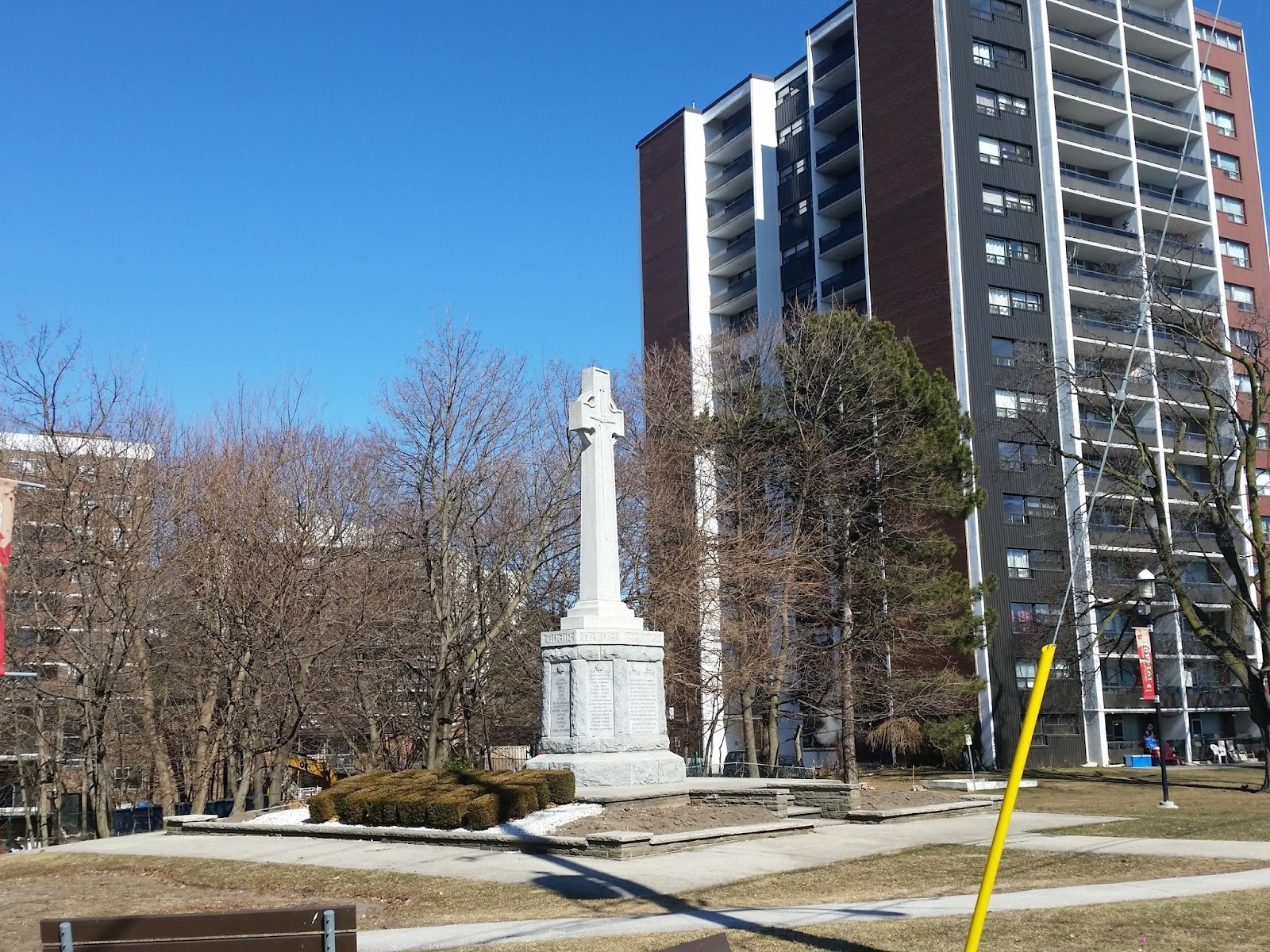 Below is an artist's rendition of the proposed development. You can see the Cenotaph in front of a thicket of trees: 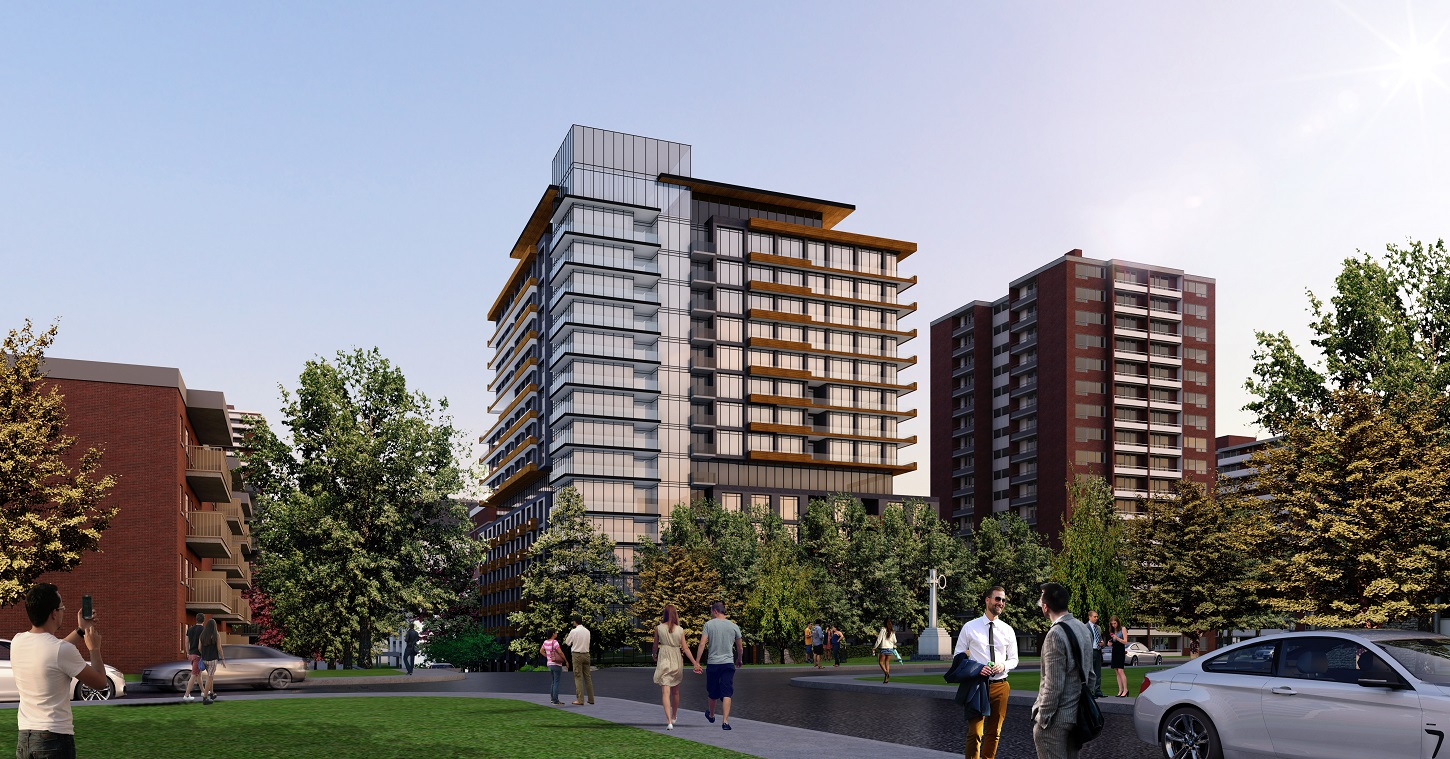 As you can see from these photos below, preliminary pre-construction preparations have already been made: 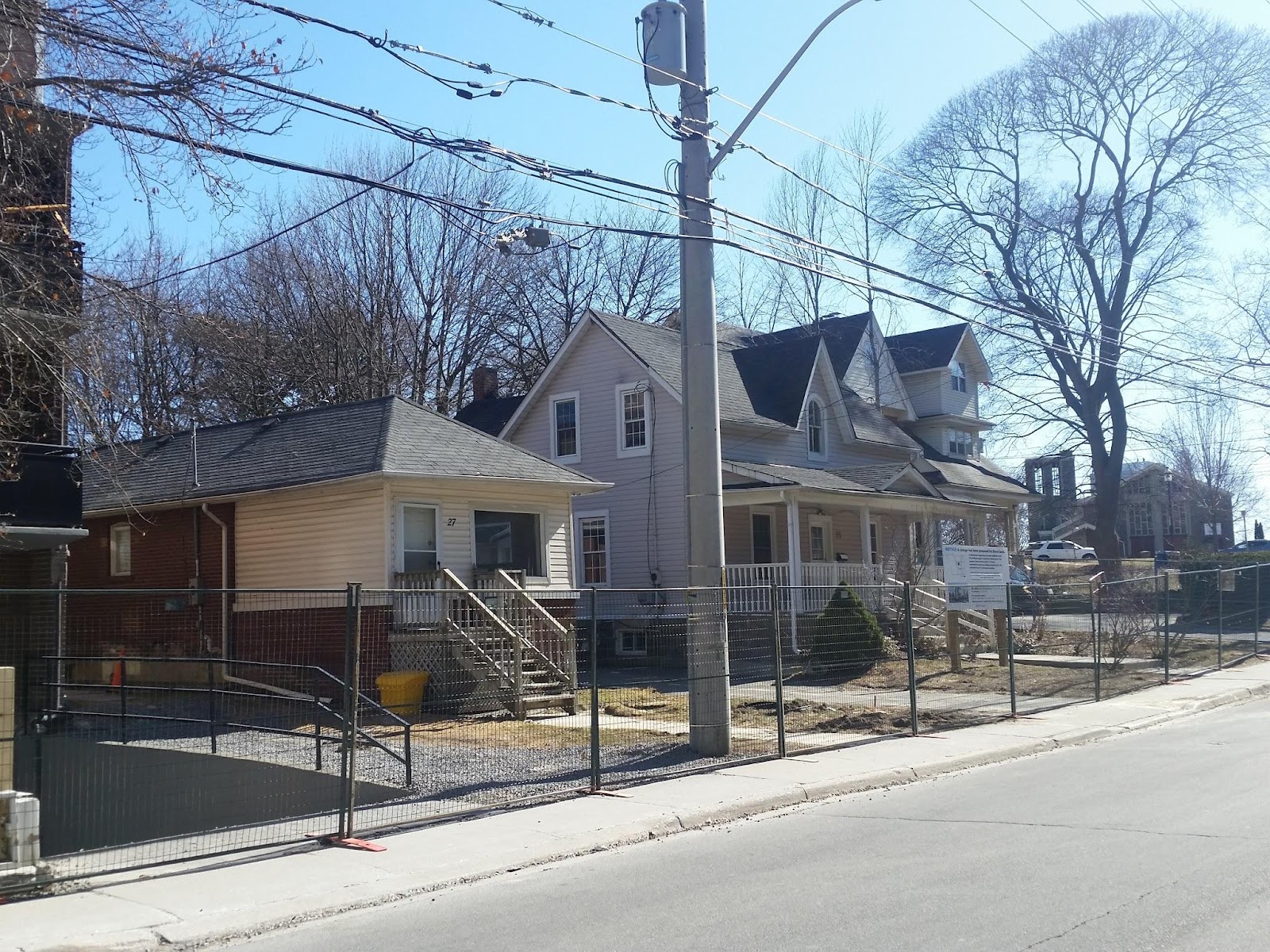 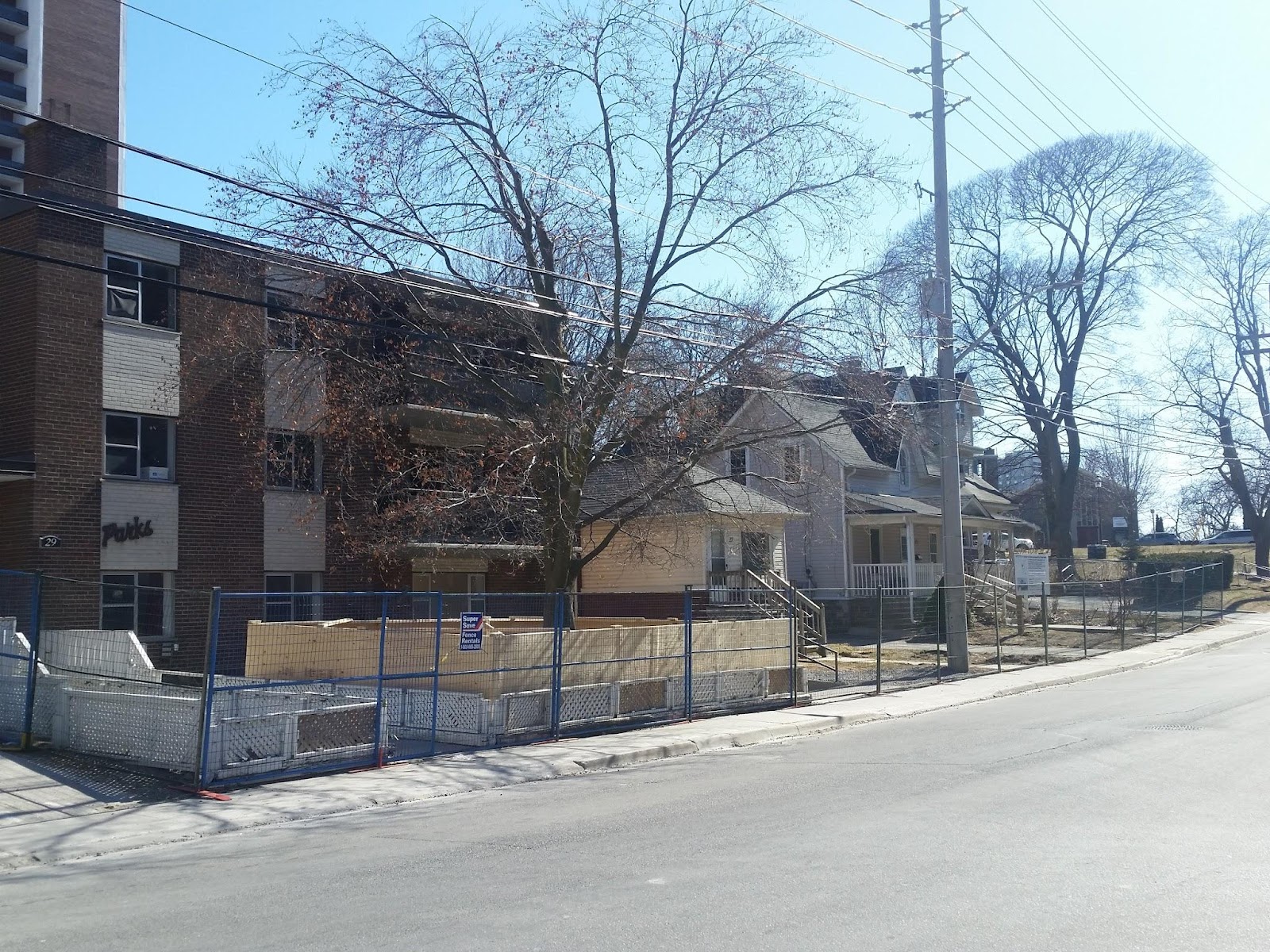 The standard process for this development application went in somewhat of a reverse direction, as this community meeting was supposed to take place prior to the statutory public meeting at council on February 26. The community meeting was to have taken place back in January, but that was postponed due to the untimely passing of then councillor Jim Tovey.

With the public meeting at City Hall come and gone, the community meeting took place this past week at Port Credit's Clarke Hall. Newly appointed interim Ward 1 Councillor Dave Cook, representatives from Edenshaw, and city planning staff were present to hear the residents' opinions and concerns on the development. 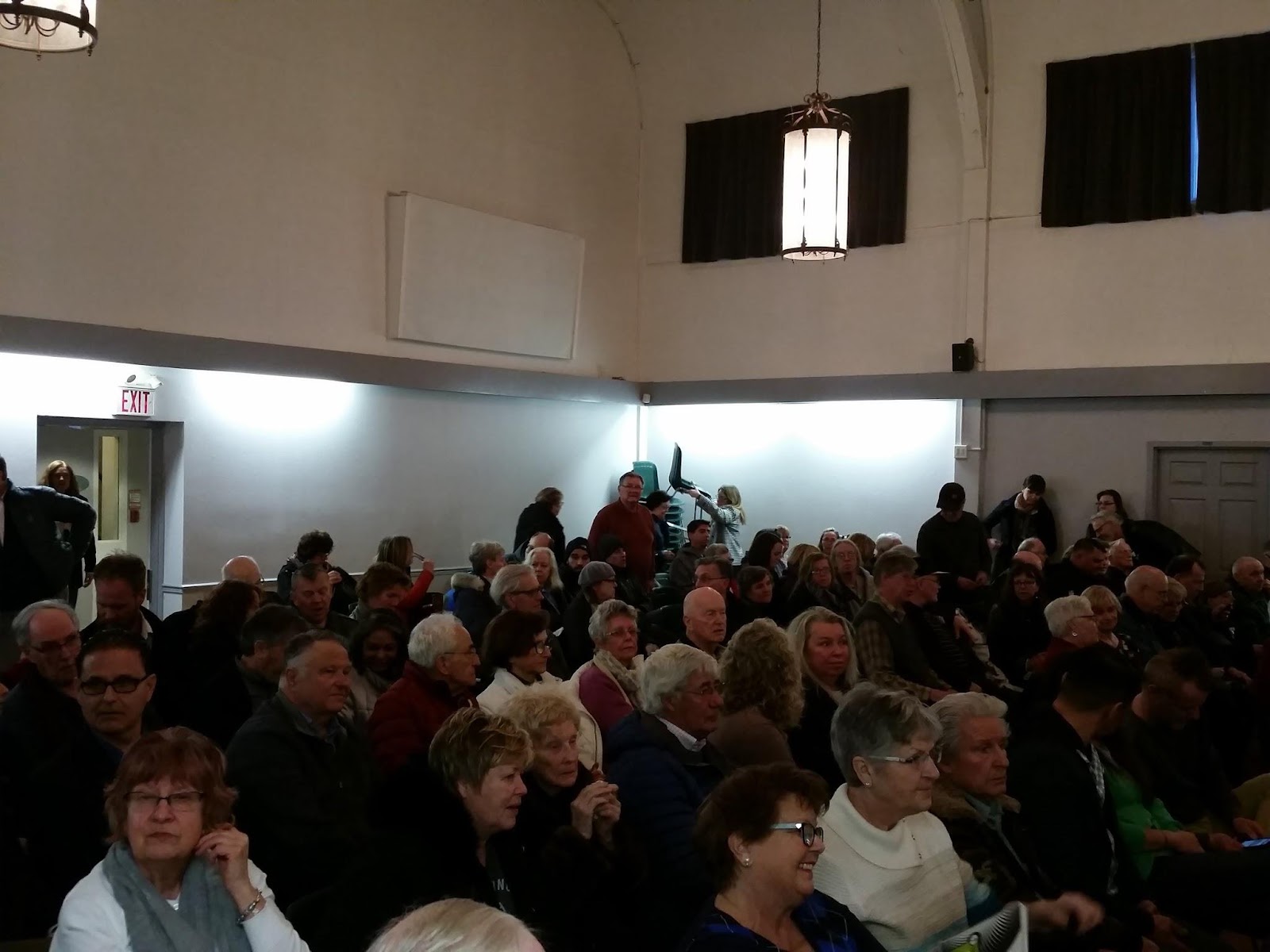 During a revised presentation Dana Anderson, a planner representing Edenshaw, said that the application has been scaled back from 207 units to 202 units, and that the residents who once resided at 29 Park Street have been properly relocated.

The architect for the developer said there was a particular scaling back on the heights of the structure as it descends from 10 storeys to six storeys. The intended goal was to make the development not look too overbearing in comparison to the surrounding properties.

Here are a variety of comments as articulated by residents at the meeting:

Karen Colwell, who said she lived across the street, asked the architect if it was possible to scale back the height from 15 storeys to just 12 storeys. The architect replied that the technical definition is 15 storeys, and that they thought the building fits appropriately within the existing context. So the short answer is, Edenshaw intends to keep the building at 15 storeys.

Chris Mackie, a resident of Cranberry Cove, said the building was too high as the floor index is only 6.35, which he claims is 50 percent larger than the standard buildings in the area. Mackie's main contention was that the development's design was not sensitive to the quality and usage of Vimy Park, as the condo looked like a straight vertical cliff looming over everything.

The planners say that they are in talks with Mississauga's Community Development department to make sure that people can still make enjoyable use of the park, pointing out the natural buffer being planned behind the Cenotaph. Mackie contends that mature trees would be affected regardless of this inclusion of the natural buffer. 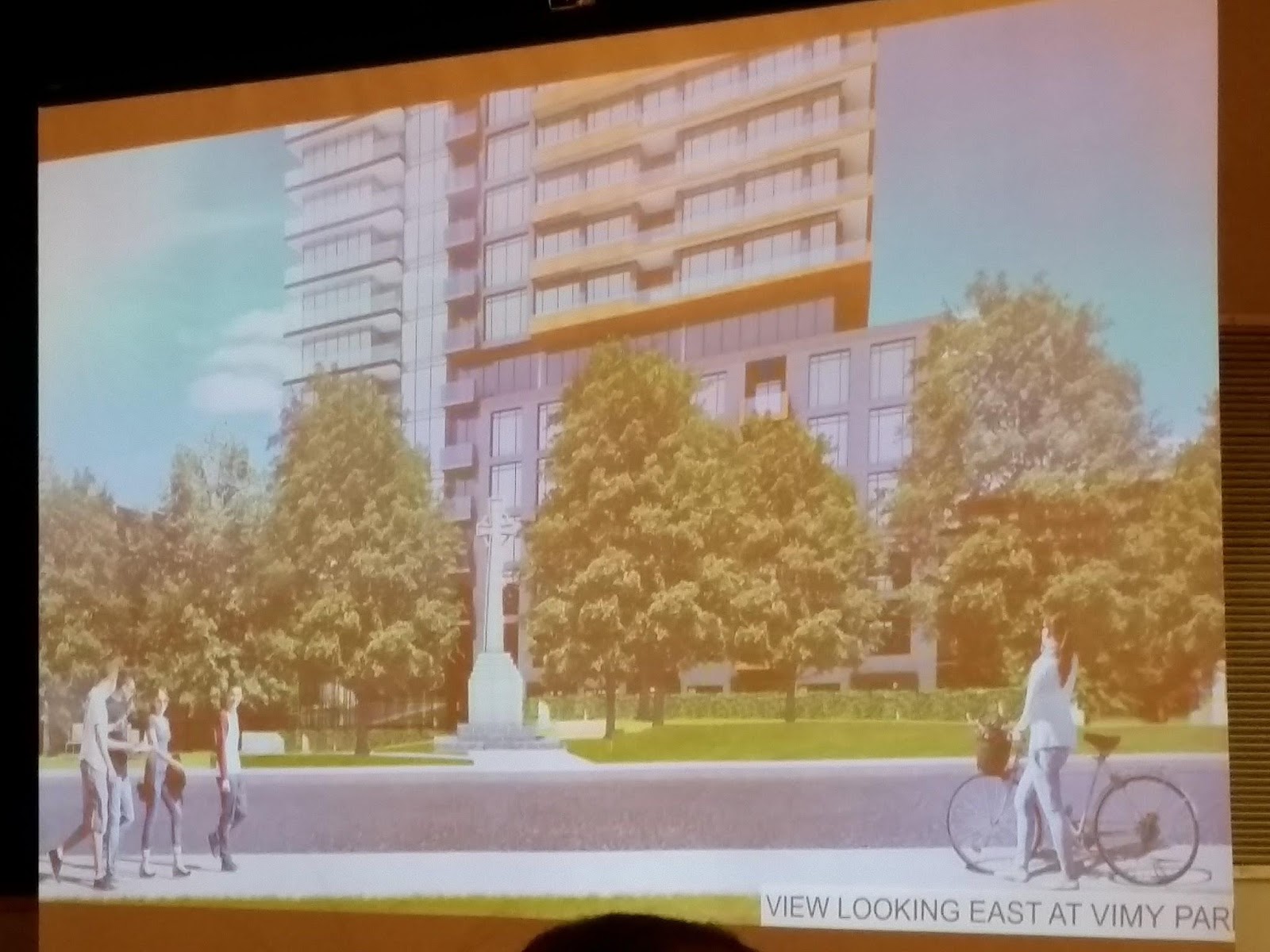 Two women came forward and raised the issue of accessibility and whether the development would be utilizing sustainable energy sources. The first woman asked if elevators would be installed for some of the lower floors so walking is not the only option for residents to get in and out. Regarding the point about sustainable energy, the architect replied there will be sustainable energy measures, but not actual sources.

A man saying he was the landlord for 12 Park Street came up and said he had no problems with the plan and said it was a good development. But he was concerned about all the festivals that come to Port Credit and how that would affect the ability of future condo residents entering and exiting his building.

Another resident actually asked if more units could be added to the development. Edenshaw said they were confident that there is demand for these units, which range from 600 sq ft to over 1,000 sq ft. They said it was for all types of residents ranging from young families, downsizers and professionals, but to add more units would require going through a re-amendment of the existing application.

Overall, there was little evidence of full-on NIMBYism. To the contrary—residents were quite respectful and most of them said they liked the development, albeit wishing there were minor changes like reduced height, or add ons like sustainable energy measures and more units.

Long time Port Credit resident Jonathan Giggs, currently the President of the Mississauga South Historical Society, a member of the city's cycling advisory committee and an organizer for Jane's Walk, gave his thoughts to insauga.com about the development:

"It's an attractive and contemporary building and Edenshaw appears to be trying to be sensitive to its location in relation to the Cenotaph, but I'm not sure the renderings made it clear how close the building will be to it. They're fairly large units, so presumably they are premium priced. Often people want more than two-car parking, and this development has less."

"But perhaps its proximity to the GO Station and future LRT will encourage travel not just by automobile. As for the neighbours complaining about the loss of views, that never works in my opinion. However, the one thing Edenshaw did not provide was a detailed shadow study."

Insauga.com reached out to Councillor Cook to get his thoughts on the development. He said the application is still going through the process at this time and nothing has been finalized, offering no further comments.

For now, the process will have to work itself out before the final conclusion comes for this new development next to Port Credit's Vimy Park.

5 unbuilt projects that could have changed...
Top 5 Chicken on the Rocks in Mississauga
Five fun things to do this weekend that are...
Top 5 chicken sandwiches in Mississauga
5 fun ways to make the most out of your...
END_OF_DOCUMENT_TOKEN_TO_BE_REPLACED