PHOTOS: Here’s What Celebration Square Looked Like During the Toronto Raptors Game 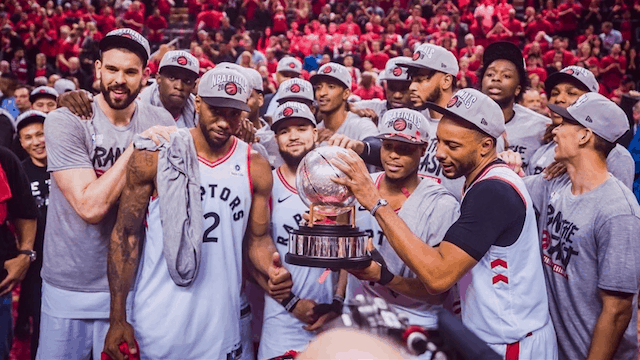 Regardless of where you watched the Toronto Raptors game last night, it was an exciting game, to say the least.

The Toronto Raptors defeated the Golden State Warriors 118 – 109 last night (May 30). This was game one of the NBA Finals.

And recently, the city of Mississauga announced that they will show all Raptors games at Celebration Square. They also put together a pre-show event and lit the whole square red.

And last night, a slew of people gathered at Celebration Square to cheer the Raptors to victory.

However, if you watched the game at home, or somewhere else, fear not because Twitter and Instagram were buzzing with photos of what happened at the Square and what it looked like during game one.

The @Raptors flag is waving high and Jurassic Park West is ready to welcome fans tonight at 8:30 p.m for Game 1 of the #nbafinals. More info *link in bio* #raptors905 #wethenorth #jurassicparkwest

#JurassicParkWest looks as beautiful as it sounds! #wethenorth #raptors905 #raptors

WE THE NORTH! #Mississauga, your energy was electric tonight! @Raptors officially take Game 1 of the #NBAFinals2019 with 118-109 against Golden State. Bring on Game 2 at #celebrationsquare! #raptors #wethenorth #JurassicParkWest

Whoa! An estimated crowd of nearly 20 thousand people are in attendance here @MCSEvents aka. #JurassicParkWest! The support for Canada’s team is unreal! Our officers are here and cheering on the #Raptors with #Mississauga while making sure everyone’s safe! #WeTheNorth pic.twitter.com/6BdbNAZZu3