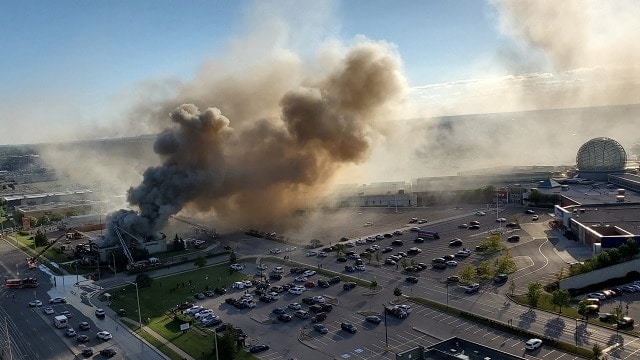 Emergency crews are continuing to fight a major fire in Mississauga this afternoon.

The fire was reported after 6:00 p.m. at the Paramount Fine Foods restaurant at Erin Mills Town Centre, with reports of the interior fully involved and fire breaking through the roof, causing the roof to fully collapse into the restaurant.

Looked out my window and Paramount Fine Foods is on fire WTF?! #Mississauga pic.twitter.com/YPhaIlBLM5

Thanks to all who expressed concern about the #mississauga fire near our offices. It was adjacent to @erinmillstown. Sadly one of our fav restaurants @ParamountFoods #erinmills caught fire. Fortunately there were no injuries. Kudos to @MississaugaFES for their swift action. pic.twitter.com/vjynRTsdmh

(Thread 2/2) No Doubter Mississauga @IAFF1212 on scene of an absolute no doubter. Multiple crews on scene working to extinguish this fire at @ParamountFoods at the Erin Mills Town Centre.#mississauga pic.twitter.com/GkMfxSg2Ce

No injuries have been reported and the cause of the fire remains unknown at this time.

Residents should continue to avoid the area until further notice.

UPDATE: Fire is continuing to burst through the roof of the restaurant, with reports that the fire is being gas fed.

Mississauga Fire has multiple aerial resources working to knock down the fire.