PHOTOS: A look at a brand new neighbourhood planned for Mississauga 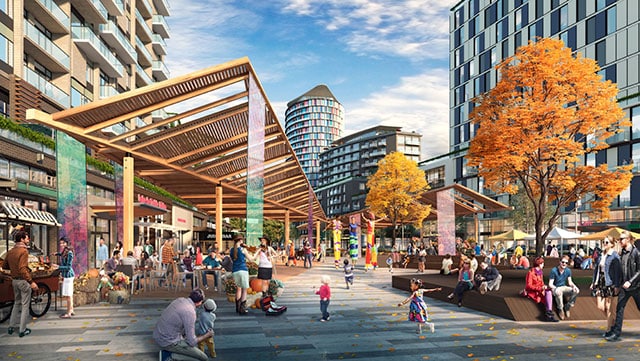 Back in the 90s, Mississauga was the epitome of a bedroom community. The sprawling city had all the typical features of the quintessential suburb: vast subdivisions marked by detached houses built on generous lots, strip plazas, a handful of indoor shopping malls, wide roads, huge intersections and a car (or two) in every driveway.

While the subdivisions and cars remain, the city’s skyline has changed, and its ambitions are evolving quite rapidly. Mississauga is now home to dozens of sleek condo towers (with many more on the way), a more fulsome transit system (which is about to be further revolutionized by the incoming Hurontario LRT) and recreational hotspots.

It’s also about to welcome some brand new neighbourhoods, including the much-talked-about Lakeview Village. 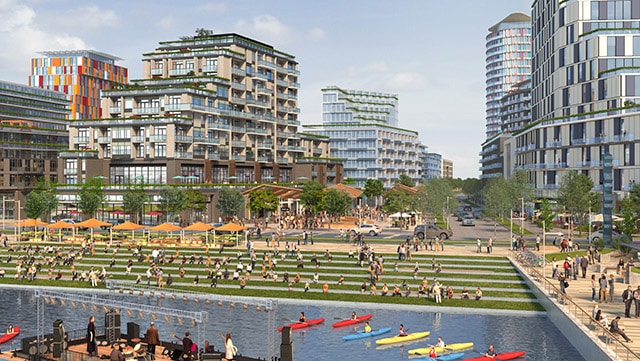 The plan sets out the framework for the development of the 177-acre site, which was once home to the Lakeview Power Generating Station lands.

The new neighbourhood is located in south-east Mississauga on Lake Ontario, approximately 3.8 kilometres east of Port Credit, near the western limits of Toronto. The site is well-connected to major roads and highways, with Lakeshore Road East forming the north boundary of the site. The neighbourhood also boasts convenient access to both the QEW and Highway 427.

The plan is incredibly ambitious, as it will see the creation of a brand new community. In a sense, it allows the city to build something new from scratch and help create a walkable, urban destination that will look nothing like the sleepy neighbourhoods that sprang up in the 70s and 80s.

“We are obviously really excited about where the master plan has gotten and excited about the future and certainly feel good about the significant amount of work that went into [getting] where we are today,” says Brian Sutherland, the director of development at Argo Development Corporation, one of five development partners working with Lakeview Community Partners to bring the project to life.

“There was so much work on the city’s behalf, having unanimous support from council is a huge thing.” 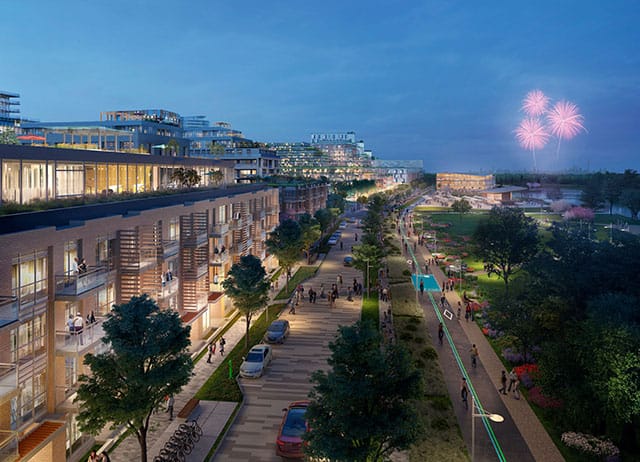 A recent Bloomberg News article says the site could be worth about $6 billion.

According to the master plan that was recently endorsed by the city, the new neighbourhood will feature housing, a hydro gateway, Ogden Park, an Artscape makerspace/community centre, a school, a waterway common, the Serson Innovation Corridor, the Marina District, Lakeview Square, Lakefront Park, a cultural institution, an outdoor event/performance space and a pier.

The Lakeview Village master plan has conveyed 67 acres of land to the city for parks, open space, cultural, and institutional uses. The conveyed lands are primarily public open space, including all of Lakefront Park, adjacent portions of Ogden Park, and the plaza within Lakeview Square. A majority of the Innovation Corridor is also within the conveyed lands, including the proposed District Energy hub.

Sutherland says the community has been enthusiastic about the project and engaged in the consultation process.

“[We’ve been] hearing from the community about what this site can be and what it should be. For the last two years, we’ve had an incredible amount of public consultation.

Sutherland says people were, not unexpectedly, most excited to imagine living near or simply enjoying the waterfront.

“First and foremost, the thing we heard in all consultations related to the lake and waterfront and parks and open space. These lands have been cut off from Mississauga for decades because of the history of its use. The waterfront trail runs away from the waterfront, so the focus really was on how do we get people back to the lake and interacting with the lake and accessing this incredible thing,” he says, adding that the pier that will be a publicly accessible feature. 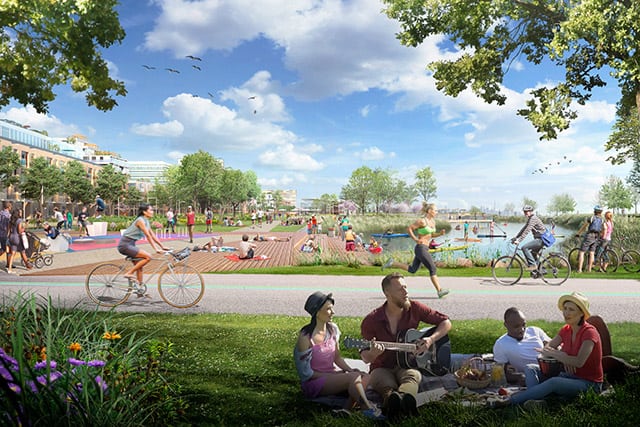 The project has attracted worldwide attention.

In the spring, LCP announced the selection of globally-renowned, Boston-based design firm Sasaki as lead master plan architect for the development of Lakeview Village.

LCP said Sasaki was chosen following an international search that attracted the interest of more than 30 local and global firms.

“They’ve worked on waterfront projects across the world,” Sutherland says.

Beyond residential and recreational uses, the new neighbourhood will also feature the Jim Tovey Conservation Area.

Named after the late city councillor who drove the ambitious project forward, the area–which is being created by Credit Valley Conservation (CVC), the Region of Peel and Toronto and Region Conservation Authority–will feature “a beautiful and naturalized conservation area.”

The CVC says it will transform the Lakeview neighbourhood into a hub for passive waterfront recreation, a hotspot for wildlife migration and a green oasis in the heart of the city.

CVC says the conservation area will be built along the Mississauga shoreline in an area that currently has no public access to the lake. Once completed, it will connect with Marie Curtis Park and the future Lakeview Village lands next to the G.E. Booth Waste Water Treatment Plant.

“Everything connects to the lake. The waterfront diverts away from the lake right now, but with completion of our project and the CVC’s [project], three kilometres of new waterfront trail will be relocated and put back on the lake. It’ll be such a fantastic transportation and connection opportunity. Someone can get on a bike and take the trail to Go Station,” Sutherland says.

Those worried about proximity to the lake should note that planners have carefully considered how close buildings should be to the waterfront.

“We spent a lot of time with the city ensuring that we’re properly thinking about the relationship with commercial and residential buildings in proximity to water. It needs to be a mid-rise community and wth attention to buildings along the waterfront,” Sutherland says.

Sutherland says parkland will set the buildings back, and that developers are sensitive to building heights along the water to ensure that the taller buildings aren’t directly overshadowing the waterfront park.

Sutherland says Lakeview Village Square will be the heart of the neighbourhood and the key when it comes to tying in all of Lakeview Village’s uses (residential, retail, recreational, cultural, commercial, etc).

“This will tie everything together and be the vibrant centre for the community,” he says. “Everything will feed into that square area.”

As far as transit goes, Sutherland says developers are working with all levels of government to ensure the neighbourhood is well-connected.

“Transit is an important aspect and something we’ve been talking to the city, province and federal government about. There will be transit improvements in this area, we’re building a transit-supported community,” says Sutherland, adding that residents can potentially anticipate more cycling and pedestrian improvements, dedicated Bus Rapid Transit lanes and connections to the TTC and Long Branch GO station.

“We want existing MiWay transit to connect here on day one. Buses coming along Lakeshore can head into this site, so there is transit service. We’re spending time thinking about other things, such as shuttle service and are thinking about an autonomous bus loop,” Sutherland says.

Since the neighbourhood will have residential buildings, many are wondering if any of the units will be affordable.

While it’s early to say how much the housing will cost or how many units will be deemed affordable, Sutherland says the creation of housing suitable for people of various income levels is being considered.

“Throughout the process, it’s been top of mind. Housing affordability is an important aspect of building complete communities. We talk to the city and Region of Peel and province and federal governments to understand the programs and priorities that they have. We’re in the midst of formalizing our strategy, it’s something that’s important,” he says, adding that residents can expect to see a mix of ground-level townhomes and high-rise units.

There are also plans to include rental housing.

While the project is moving forward, it will be some time before the neighbourhood is move-in ready.

“Th milestone of the endorsement was fantastic, but it’s the first step in a lot of ways. Now that we have council buy-in, the next steps are to move forward with development applications and zoning changes. We’ll be re-submitting all those materials in the future,” Sutherland says.

“We hope we can get into the ground in 2021. We’d hope to have occupancy in phase 1 in 2023 or 2024. We want to get this moving, the community wants to see things moving here. I think people are excited to see this move forward. We want to knock it out of the park.”

“People know what the site used to be–a polluting and coal-burning power plant. One of the stories being told is that we’re taking this infrastructure and reusing it to create a coastal conservation area, which is really green. From a remediation standpoint, although it takes time and resources, it’s not an incredibly dirty site that causes us any real concerns,” he says.

“We were thrilled to work with city staff and such an engaged community. They feel like they’re a part of what happened here and they are a huge part.”