People Call for Change at Police Oversight Meeting in Mississauga 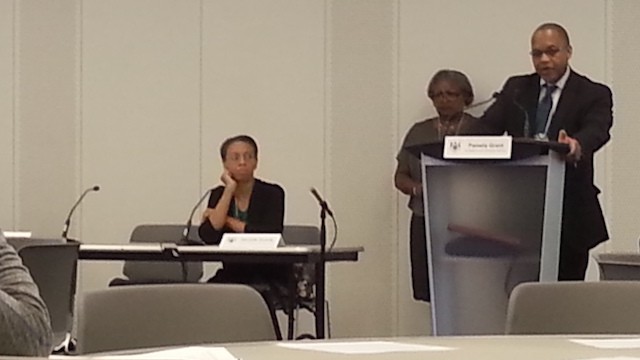 At a public meeting held Wednesday evening at the Meadowvale Community Centre, many people who attended expressed the same two sentiments: They’ve had negative experiences with police, and they didn’t believe agencies such as the Special Investigations Unit were doing a good job of keeping police officers in line.

The meeting was for the Independent Police Oversight Review, designed to gauge public opinion and hear what ordinary citizens think about the current state of police accountability in Peel and the rest of the province.

Headed by Justice Michael H. Tulloch, the meeting was attended by Mayor Bonnie Crombie, Police Board Chair Amrik Ahluwalia, and a group of more than 30 citizens who — by the time the meeting was over — had made it clear that many of them had a vested, personal interest in seeing some improvements in the police force.

One such citizen was Joanne MacIsaac, sister of Michael MacIsaac: An Ajax man who passed away in December 2013 when he was shot by police, while having what his family says was an epileptic seizure. The SIU later ruled that the officer involved would not be charged with MacIsaac’s death.

Now, more than two years later, MacIsaac’s family has not given up on seeking justice for Michael. They sat around a table at the meeting and passionately discussed a questionnaire handed out to every person in attendance. The questionnaire asks for opinions regarding police transparency and accountability, and whether or not police oversight agencies should collect data on things like race, gender, age, and mental health.

It also notes that Ontario has three different police oversight agencies: The Special Investigations Unit, the Office of the Independent Police Review Director, and the Ontario Civilian Police Commission. Most people at the meeting were only familiar with the SIU, and some had not even heard of the latter two agencies.

When the 45-minute time period allotted for discussion of the questionnaire was over, attendees were invited for the next hour to openly share their thoughts and opinions with everyone else in the meeting. Joanne MacIsaac stood up first, speaking for herself and the rest of her family.

“My views on the SIU and police oversight agencies are not very positive,” she said, talking into the supplied microphone. “We spoke around the table and I think we all agreed that, with the SIU, there should be no former police officers. They cannot be independent. The investigations are done through blue-coloured glasses. There’s no impartiality with that.

“We do think that drug testing all officers should be mandatory,” she continued, moving on to another issue. She proposed two drug tests per year (every six months) as the minimum. “But definitely, when an officer has been involved in a shooting or discharges his firearm, he should be drug tested immediately.” She mentioned the small transportation company her family owns, and their own habit of randomly drug testing their drivers, with immediate testing for a driver involved in a collision.

“I think that someone who has such enormous power–“ Her voice begins to break. “–and carries a weapon and has the ability to kill any of us… We should be drug testing these people.”

As soon as those words left her mouth, she received a large round of applause from the rest of the room.

As the meeting progressed, more and more people vocalized the issues they’ve had with police, both in the past and present. One man stated that as a visible minority, he has been frequently carded by police ever since he was young, to the point that he has sadly come to expect it. One woman questioned why police officers who are accused of a crime rarely seem to have their name and identity released to the public, when that would not be the case for any other civilian. The popular opinion seemed to be that the SIU is not effective because it’s more concerned with covering for the police, rather than objectively investigating police affairs for any signs of wrongdoing. Other people added that, in terms of diversity, they didn’t really see themselves represented in the police force.

After everyone had gotten a chance to speak, Mayor Crombie took the opportunity to thank everyone for coming and to voice some of her own thoughts.

“We have a goal, and that goal is to increase openness and transparency and accountability,” she said. “We need to take a good look at ourselves and determine, how can we improve? How can we move forward? What are other forces doing that we should be doing too? Particularly on the diversity issue. Why doesn’t Peel Regional Police represent the community? What are those obstacles to recruiting officers from different communities? Why aren’t there more black officers, Sikh, Muslim?”

While Crombie believes that Peel police have been trying and putting forth a good effort, she also believes that they still need a push in the right direction before we start to see results. She agreed with the lack of diversity in police, saying the police force isn’t diverse enough in a city where 56% of the population is a visible minority. However, perhaps most importantly, she stated she had hope that the city’s police would be able to improve, thanks in part to the comments and concerns of those who attended the meeting.

What are your thoughts on the matter? Do you agree with the points that were made concerning police accountability, or a lack thereof? Let us know!