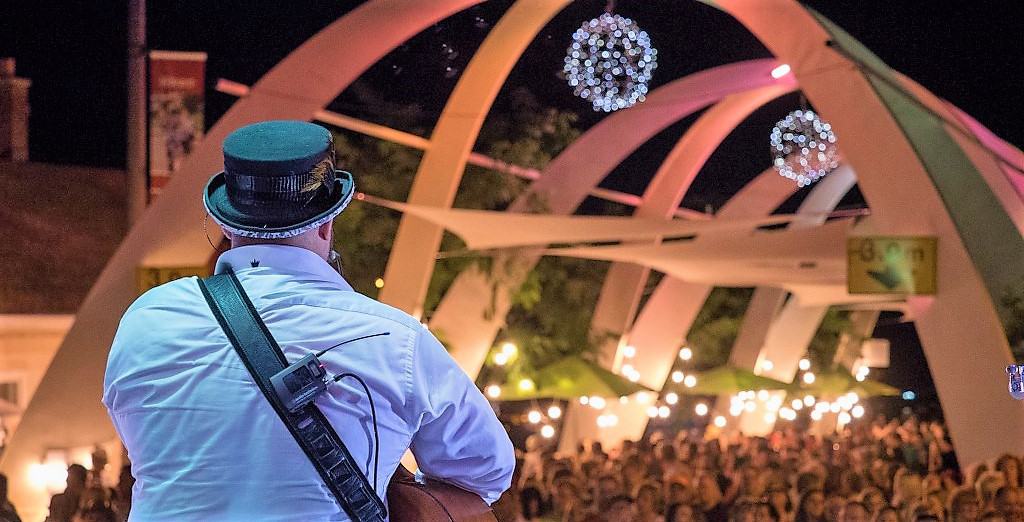 An entertainer plays to the crowd under the arches at a previous Pelham Summerfest. (Photo: Town of Pelham)

A section of Pelham Town Square, between Pelham Street and the front of the Pelham Town Hall, will be closed today (July 28) from 8 am to noon and tomorrow from 8 am to 4 pm but the reason is one that will make residents smile.

The area is closed due to the completion of underground foundation and site preparation in advance of the new Pelham arches installation.

That’s right – the iconic arches are almost back.

Working jointly, the Rotary Club of Fonthill and the Pelham Summerfest committee did have a plan to rebuild the arches by June but that didn’t happen.

They were also hoping the arches could be resurrected for the four-day Pelham Summerfest which was held July 14 to 17 so they missed that deadline, too.

However, it looks like they’ll be back for the Niagara 2022 Canada Summer Games hitting the region August 6 to 21.

Originally the arches were built for Summerfest 2012 but became such a hit with residents for their distinct design that the town decided to leave them in place.

Built off Pelham Street on the alleyway that leads to the Pelham Town Square, the arches were originally inspired by the Casa Batllo in Barcelona, Spain.

However, a wind storm on February 24, 2019 sent one of the arches crashing to the ground so the town shut down the alleyway altogether. After town staffers determined they couldn’t be fixed, they were torn down as a safety precaution. Once they were cleared, the alley reopened to the public.

Leah Letford from the Pelham communications office told Insauga earlier this year that a push by the Rotary Club of Fonthill to rebuild them in 2019 had earned council approval but the rebuild got sidetracked by the pandemic.

“Suddenly, dealing with COVID-19 was our priority,” she confessed. However, she added the rebuild would meet all specifications put forwards by the town’s Building Department.

The arches were so popular and uniquely-built that they won a 2013 Niagara Community Design Award from the region.

However, the shift from a rebuild in 2019 to 2022 has brought a new hurdle. The costs of construction material has skyrocketed in just three years and will add another $60,000 to the 2019 estimated costs.

To that end, the group behind the rebuild has shifted from a four-arch design to a three-arch one that will bring it in 16 feet from either end of the alleyway.