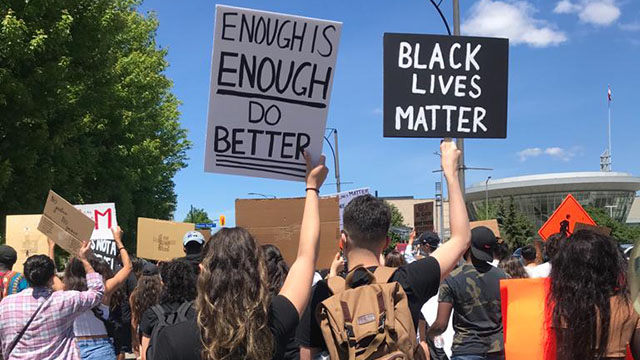 When anti-racism protests broke out across North America and eventually made their way to Brampton and Mississauga, some wondered if the well-attended events would lead to an uptick in COVID-19 cases.

According to Dr. Lawrence Loh, Chief Medical Officer for the Region of Peel, the protests do not appear to have contributed to an increase in cases.

“Overall we’ve seen a trending decline of new cases in the region, so there isn’t anything to suggest an increase since the protests have taken place,” Loh told insauga.com.

“Because numbers are lower, there are certain peaks and valleys that will occur on a day-to-day basis, but nothing we can trace back to protests specifically.”

The protests, held in response to the death of George Floyd–an unarmed Black man who died in police custody in Minneapolis–and systemic racism in policing and other institutions in Canada, took place both Brampton and Mississauga over the course of several weeks.

More recently, daily protests have been held following the police-involved shooting death of Ejaz Ahmed Choudry, a 62-year-old Mississauga man who was killed after police entered his Malton apartment to conduct a wellness check.

Loh said the anti-racism protests, which were held outdoors, might not have spurred an uptick in COVID-19 cases because of safety measures implemented by organizers, such as mandatory masks and rules surrounding physical distancing and hand hygiene.

“The protests had rules that were helpful and hopefully contributed [to the lack of spread],” Loh said.

Loh says two factors driving spread in the region–as of June 29, 6,201 confirmed and probable cases have been reported in Peel–are workplace and household outbreaks, particularly in Brampton.

“A lot of the pandemic [spread] can be traced to a couple of factors. Brampton has significant workplace outbreaks in places where it’s difficult for people to distance or work from home,” he says, adding that any workplace that reopens should have a COVID-19 safety plan that allows for mask-wearing, physical distancing and hand hygiene.

“We have also noted household clusters in Brampton related to multi-generational homes and communal homes. We continue to talk to the province about an alternative, such as isolation facilities.”

The fact that the protests did not lead to an uptick in cases supports the theory that COVID-19 transmission is less likely to occur outside. According to the Public Health Agency of Canada (PHAC), there is “limited evidence on the transmission of COVID-19 outdoors, including the presence and survivability of SARS-CoV-2 in the outdoor environment.”

PHAC says the evidence suggests that the potential for transmission may be lower outdoors than it is indoors, with one cluster investigation finding that transmission was 18.7 times more likely in closed areas compared to open-air environments. PHAC says another study found that only one of 138 small COVID-19 case clusters studied occurred outdoors and was attributed to a close conversation with an ill person.

The lack of increase related to the Peel protests follows confirmation from Toronto Public Health that a day of crowding in Trinity Bellwoods Park in May did not lead to an increase in cases in residents who visited the area.

When asked if the region will consider making masks mandatory in indoor spaces, Loh said that while Peel Public Health strongly recommends the use of masks when distancing is not possible, there are no plans to make them compulsory at this time.

“Masking is a way to show respect for other people and make sure you’re protecting them if you’re brewing an infection,” he says.

“In terms of a mandatory order, I’d consider that in a different context. At this time, what people are doing is working. I continue to recommend them and I encourage businesses to recommend them.”

Overall, Loh says the trends in the region, which entered stage 2 last week, are positive.

“We continue to monitor all cases and we’re seeing that cases are on the decline and we’re hoping that trend will continue.”

Editor’s note: The Region is expected to make an announcement about mandatory masking this morning (June 30)