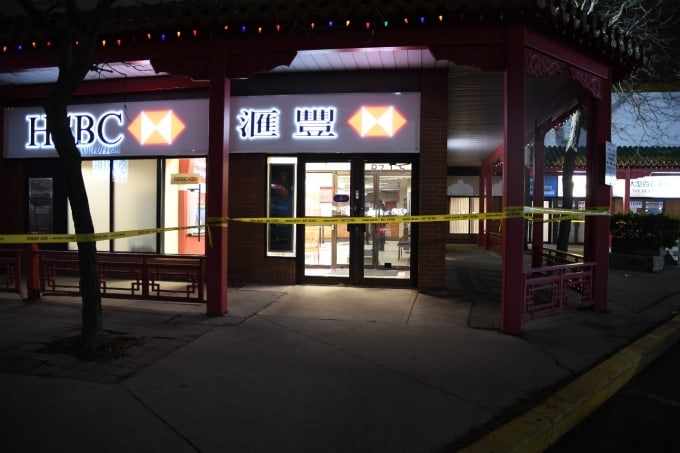 The Special Investigations Unit (SIU) has ruled that a Peel Regional Police officer who shot a 16-year-old boy in the lower back/buttocks during a bank robbery in Mississauga will not face any criminal charges.

The officer involved in the shooting declined to be interviewed or turn his notes over to the SIU, as is his legal right.

The SIU report says that on the afternoon of Nov. 26, 2019, police officers were flagged down by a resident who said a bank robbery was in progress at the Hong Kong and Shanghai Banking Corporation (HSBC) bank in the Mississauga Chinese Centre (888 Dundas Street East).

The report says that the officers, led by the officer who fired at the suspect, drew their firearms and ran to the bank, arriving within seconds.

The SIU says that a couple of minutes earlier, the teen walked into the bank brandishing a semi-automatic pistol, prompting the bank’s employees to seek shelter behind and under desks as the teen demanded money. The SIU report says a worker put some cash and coin together and gave them to the bank security guard to give to the boy. The suspect took the money and demanded more, according to the report.

When the officers entered the bank with their firearms drawn, the boy reportedly ran toward the west wall of the bank. Within seconds, a single shot was discharged from one officer’s firearm, striking the teen in the lower/mid-back. After he was shot, the teen dropped the gun—which was unloaded–and was arrested without further incident.

Paramedics transported the teen to St. Michael’s Hospital where he was treated for serious internal injuries.

Joseph Martino, the director of the SIU, says that based on his assessment of the evidence, there are no reasonable grounds to believe that the officer who shot the teen committed a criminal offence.

“On the record developed by the SIU, I am unable to reasonably conclude that the [officer’s] resort to lethal force fell outside the limits of legal justification,” Martino wrote in the report, adding that the officer had reason to act swiftly after seeing a masked suspect in a bank with a firearm.

Martino said that while it’s concerning that the teen was shot in the back–suggesting he was not facing officers when he was struck–evidence suggests the boy was menacing employees and posing a serious threat to others.

“The evidence establishes that the [teen] had terrorized upwards of ten bank employees. He jumped up and down desks beside the teller counter, shouted angrily demanding money, invaded the personal space of the employees behind the teller counter and in their offices, and pointed his firearm directly at several of these persons and threatened their lives,” Martino wrote.

“While the [officer] would not have been privy to this conduct, the violence with which the [teen] pursued his purpose lends credence, in my view, to what likely was a genuine concern on the part of the officer of imminent death or grievous bodily harm at the hands of the [teen].”

Martino also wrote that witnesses told the SIU that the teen ignored verbal commands to “freeze” and “put his hands up.”

Martino wrote that he believes the officer felt the teen posed a serious threat and that the chaos of the situation necessitated quick action.

“Given the immediate risk posed to the life and limb of persons present in the vicinity of an individual armed with a firearm, the [teen’s] movements and the reaction time inherent between the decision to fire and the actual gunshot, I am unable on the totality of the evidence to reasonably conclude that the [teen] was not a threat warranting a resort to lethal force because of the location of the wound in his back,” Martino wrote.

The file is now closed.