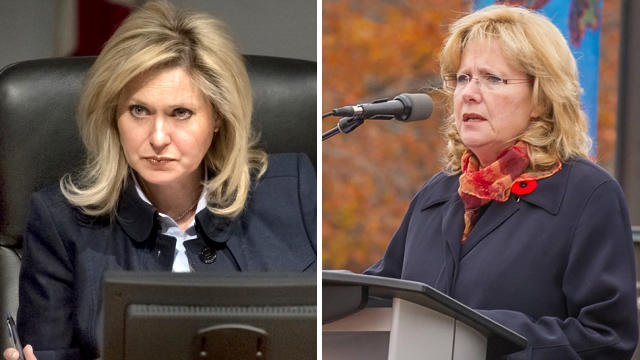 The Association of Municipalities of Ontario (AMO) recently concluded their annual meeting last week in Ottawa. Unless you happen to work in the municipal government sector or serve as an elected official in a municipality, the AMO meeting would most likely be of little interest to you…unless, of course, money is involved.

This year, AMO proposed increasing the Harmonized Sales Tax (HST) by one per cent and dedicating that portion to fund municipal infrastructure needs, as this press release outlined. They also produced this video providing a brief explanation, calling it “Local Share”:

AMO’s position is that while municipal governments work constantly to provide critical services such as good roads, clean drinking water and safe communities, the growing needs and costs are relying too much on property tax revenue. AMO estimated that municipal governments will face an annual shortfall of about $4.9 billion for the next 10 years to maintain current services and address the infrastructure gap. The dedicated amount of revenue from one per cent of the HST would allow municipalities to finance their infrastructure investments in the long term, without having to go, as some say, ‘cap in hand’ to the province for more money every year.

“We’ve done our homework, and it’s clear that property taxes can’t keep up with growing local needs,” said Lynn Dollin, the President of AMO. “Municipalities have been funded the same way for decades. Obviously, times have changed and if we want to build communities for the future, municipal governments need a greater local share of tax dollars.”

Notice how Dollin used the phrase, “do your homework”; that is the same line frequently used by one of the most well known municipal leaders in Canada, whom a few years ago was named an honourary lifetime member of AMO: former Mississauga mayor Hazel McCallion.

AMO invited the three political party leaders of Ontario, Liberal Kathleen Wynne, PC leader Patrick Brown and the NDP’s Andrea Horwath to speak at their gathering. Each were pressed about their position on increasing the HST by one per cent by former Toronto Star journalist Richard Brennan, but while each provided different answers, all three pretty much said no to any tax increases.

Brown said he would address the infrastructure cost overruns recently outlined in the provincial Auditor General’s report, saying there’s billions of dollars that could be available if better management to avoid cost overruns could be achieved. Horwath said she would look at something like uploading the costs of transit from municipalities to take the pressure off local budgets, and implementing a pharmacare plan which would not require municipalities to pay the employer contributions (although Horwath didn’t say how this would address that $4.9 billion shortfall).

Wynne cited the $300 million per year Community Infrastructure Fund that was put in place as permanent funding, $190 billion that would be cumulative, and said ‘we need to have a conversation’ as to what the real infrastructure gaps are, saying with a straight face that the idea of an HST increase had never come across her table. Needless to say, the three provincial party leaders’ responses were not quite well received by Peel Region’s local mayors, Mississauga’s Bonnie Crombie and Brampton’s Linda Jeffrey.

“If the government does not accept the one per cent as a solution, then I ask them what will they accept? The $190 billion they have invested in infrastructure is welcomed by cities, but it is playing catch up for decades of neglect. We cannot wait for the federal and provincial governments to decide to provide funding; it can dry up just as fast as it is given,” Crombie said in an email statement to insauga.

“Cities need a long-term, sustainable revenue model that recognizes the tremendous pressures we face. Unlike the federal and provincial governments, we only receive 10 cents of every tax dollar collected, yet we own two-thirds of all infrastructure. The math doesn’t add up. The property tax is regressive and cannot be hiked with abandon. If we want to build 21st century cities, we need more than 19th century tools.”

I also asked Mayor Crombie if the city, within its own budget, found enough efficiencies and savings to free up enough revenue equitable to the amount that would come from the one per cent HST hike. Crombie’s response was to cite the 2017 budget, where they realized $4.1 million in cost savings, equivalent to reducing Mississauga’s tax levy by 0.9 per cent.

But she also gave comments that echoed one of Toronto Mayor John Tory’s frequent lines when pressed about the state of municipal-provincial relations, namely that Tory was tired of being treated like a so-called ‘boy in short pants’ at having to constantly go beg Queen’s Park for more money for infrastructure or affordable housing.

“It’s time the province and federal government come to the table with cities as an equal partner and change the way we do business to create a revenue model that allows cities to be less reliant on handouts and a greater ability to control our own affairs,” Crombie continued. “Cities are where jobs are created and where the majority of wealth in this country is created. It’s time we are recognized for this and given our fair share.”

“We’re mature and responsible and can handle greater powers to raise revenues and control our futures. Our residents expect high quality services and we are expected to deliver. It’s about time we have the power to do so.”

“Across Ontario municipal costs and responsibilities are growing and our municipal revenues just aren’t keeping pace. Costs are driven by factors such as rising insurance and electricity rates, increased demand for services and provincial legislation,” said Jeffrey in an email statement to insauga. “My residents don’t care which level of government solves the problem but they recognize there is a challenge for our City to keep pace with our growing and aging infrastructure needs.”

“Brampton demonstrated leadership in it’s last three budgets by implementing a 2 per cent infrastructure levy to assist in our long term plans to rehabilitate the city’s growing and aging infrastructure capital assets. No one wants to pay more taxes. AMO research shows that if higher property taxes and user fees are the only revenue option, municipal property tax bills and user fees might need to double by 2025.”

“That represents a revenue increase of at least 8 per cent each year for the next decade. As the Mayor of Brampton I think this is an unreasonable burden on my tax payers. As we head into a Provincial election I look forward to hearing what the leaders will propose as a solution to this $4.9 billion annual gap,” Jeffrey continued.

As for Brampton’s efforts to find efficiencies within themselves, Jeffrey cited an exercise recently conducted in creating an asset management plan, which would give the city a document and metrics which help prioritize the life cycle of all of Brampton’s facilities and equipment. The mayor was optimistic that they were making progress, but without some additional revenue source, Jeffrey concedes that municipalities will continue to have to look at service levels, property tax increases, or returning to the provincial or federal government for assistance.

The unfortunate reality is, no matter if it is the Ontario Liberals or one of the other parties in office at Queen’s Park, they have a vast array of revenue streams at their disposal, whereas municipalities rely on property taxes as their primary source of revenue. But municipal leaders should be very cautious in adopting this constant position of calling for additional monies from higher levels of government; if possible they should look within their own budgets and administrations to see if there are “efficiencies” (yes, namely cuts if necessary) that could be tried out first to see if there was enough money freed up through that process rather than just put in another tax.

I don’t fault smaller communities if they request more cash from their provincial or federal governments; by their nature of being small towns or villages there is not much to cut there anyway. Mississauga and Brampton, being two of the biggest cities in Ontario with vast municipal administrations, could most likely stave off hiring more middle managers than required (Brampton recently had a culling of top level staff, although that was more to do with Mayor Jeffrey fulfilling a promise to shake things up within city hall than anything regarding stable infrastructure funding). Sometimes when I hear all these mayors and municipal leaders rally around the banner of another ‘revenue tool’ for their big projects, they sound as though they’ve forgotten how this would affect their ordinary tax paying residents.

Then again, when you talk about a measly 1 per cent HST bump, and then I hear this swath of angry callers on talk radio during my own daily commute every day, you’d have to ask yourself “is this really going to hurt them as badly as they say, or are these people just posturing for the sake of posturing?”