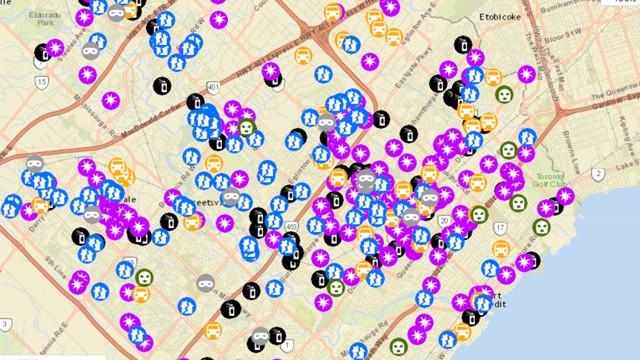 While crime in Mississauga and Peel isn’t treacherously rampant and you are almost certainly safe right now and at most times, it does happen and its presence can affect your peace of mind.

Although the very idea of the map might seem a little morbid and paranoia-provoking, Peel police claim it’s an “effective way to increase community awareness, feedback and involvement.”

Basically, you key in an area (say, Hurontario) at the top right hand corner of the page and wait for a list of recent crimes to appear on the left side of the screen. The crimes each have a specific icon associated with them and range in severity from mischief to theft to homicide. Using this map, you can get a general idea — Peel police acknowledge in a disclaimer that the map may be imperfect and they’re not responsible for any ill effects you may suffer as a result of using it — of where crime (and what types of crime) is occurring.

If you learn that, for example, a lot of cars are being broken into in a specific neighbourhood, you might take note and ensure you lock your vehicle and/or use public transport. You can also look your street up and be reassured that nothing untoward has happened in your neck of the woods in the recent past (at least according to Peel police’s knowledge).

So, use this if you’re curious, but be mindful of its limitations and do your best not to let it convince you that the city is inherently unsafe.

If you want to take a look at where crime is happening in the region, you can use this Peel police crime mapping application.