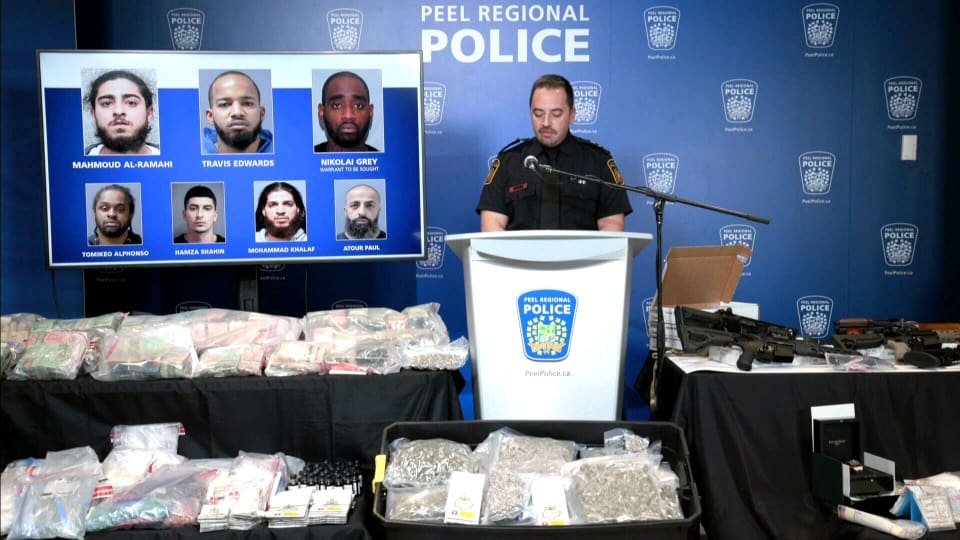 Peel Regional Police say over 800 charges have been laid after investigators “dismantled” an allegedly criminal organization known as “New Money So Sick” which is linked to homicides, drug trafficking and a number of “brazen open-air public shootings.”

“This organization has been linked to some of the most thoughtless violence our community has suffered for the last several years,” says Nishan Duraiappah, Peel Regional Police Chief.

The investigation, called Project Siphon, was launched in September 2019 and it focused on the gang allegedly responsible for running a drug delivery network out of Mississauga and Brampton.

“In addition to the trafficking of large quantities of cocaine and fentanyl, this investigation has also linked the gang to some of our most outrageous incidents of violence,” says Deputy Chief Nick Milinovich.

Since the beginning of the investigation, Milinovich said 83 search warrants have been executed across the GTA and 88 people have been arrested in connection with the case.

During the search warrants, investigators say they seized 34 firearms, nearly $1.4 million in Canadian cash and more than $1.9 million of illegal street drugs, including 1.4 kg of fentanyl, 13.7 kg of cocaine, 1.2 kg of crack, 187 kg of marijuana and other illegal substances.

More than 500 officers worked on this project, according to Milinovich.

Duraiappah mentioned that Peel police doesn’t typically “provide notoriety or a platform for street gangs by crediting them by name” but said, “as a result of this investigation, we have supported the status of this gang as a criminal organization.”

One of the homicides mentioned in the conference was the death of 17-year-old Jonathan Davis who was shot after a group of suspects sprayed more than 100 rounds into a parking lot packed with kids behind a Malton apartment building on Sept 14, 2019.

Peel Police say that evening the gang got together at the back of the building, which is located on Darcel Avenue. Investigators say that the group was shooting a rap video.

Six people were struck by bullets and Davis was fatally shot.

Another murder connected to the gang was the shooting of 28-year-old Giovanni Delahaye who was shot to death in a car while stopped at a red light near Highway 410 and Derry Road in Mississauga in October 2019.

The most recent homicide linked to the gang occurred this year in August, according to Ottaway.

Abdifatah Salah was shot to death at a townhouse complex in Mississauga on August 3.

“Investigation has revealed that the victim was a frequent customer of Sickspensary, which is an illegal mobile cannabis operation that operates in the region of Peel by New Money So Sick gang members,” Ottaway says.

“It is the investigators’ belief that the victim’s association with Sickspensary was a factor in his murder.”

Peel Police say on Nov 12, one of the leaders of the gang, identified as Mahmoud Al- Ramahi, was charged in connection with the homicide.