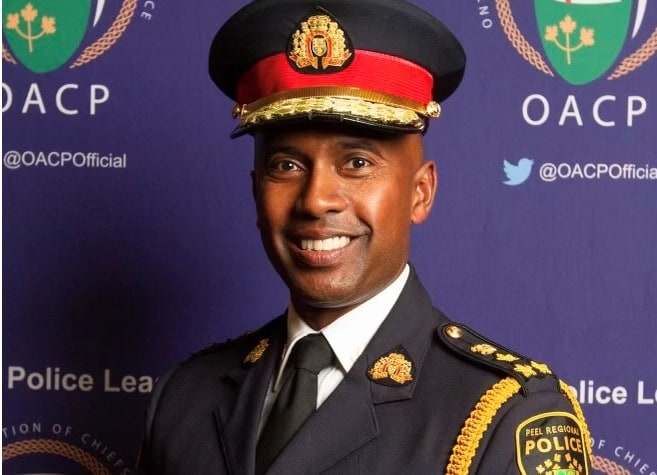 Peel Regional Police Chief Nishan Duraiappah will helm the Ontario Association of Chiefs of Police (OACP) as its president over the next year.

The appointment was announced on Monday.

Chief Duraiappah succeeds the outgoing president Gary Conn, who is the police chief in Chatham-Kent. Under Duraiappah, who was named PRP’s top-ranking officer in 2019, the police service has undertaken what it calls a “commit(ment) to being Canada’s most progressive, innovative and inclusive police service.” The Peel police, who patrol Mississauga, Brampton and Caledon, are Canada’s third-largest municipal police service.

“I want to thank Chief Conn for his incredible leadership and contributions during an important and transitional period in policing in Ontario and across Canada,” Duraiappah said in a statement.

“As we look to the future, there is an opportunity to make seismic shifts in incident response and how police services in our Province can better serve their communities. By establishing multi-sectoral partnerships to find upstream solutions, together with our communities, we can better address systemic and societal issues rather than continuing to apply traditional police and justice system response.”

Duraiappah was previously deputy chief of the Halton Region Police Service. Since his appointment as chief of PRP in 2019, it has:

The OACP is a not-for-profit association established in 1951 to be the voice of Ontario’s police leaders, serving police leaders in the federal, provincial, municipal, and indigenous police services all across the Province, as well as affiliated organizations in the public and private sectors.

“We are excited that Chief Duraiappah will lead our association,” Conn stated. “Chief Duriappah’s passion and dedication to professional and accountable policing ensures that the OACP will remain the voice of progressive policing, one that prioritizes the safety and wellness of our sworn and civilian police professionals and communities members.”