Pedestrian walkway is over for downtown St. Catharines 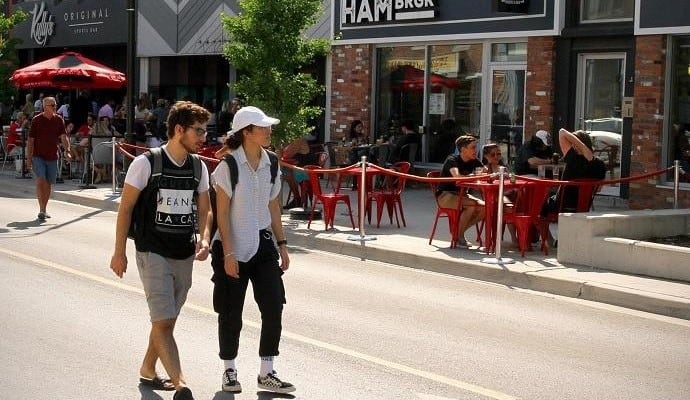 There will be no walking down the middle of St. Paul St. through the downtown St. Catharines core this summer as the pedestrians-only program has been shut down.

The pedestrian walkway program in downtown St. Catharines is over.

The summertime weekend shut-downs to traffic were hugely popular with visitors but perhaps not so much with some of the businesses on St. Paul St.

Apparently, what worked well during the desperate times of the COVID-19 pandemic when restaurants struggled to stay afloat is not quite as business-friendly with the restrictions lifted.

When the pedestrian walkway launched in 2020, restaurateurs jumped at the chance to expand their patios to the road’s edge.

However, these days, restaurant owners are worried about access to their businesses, particularly for food delivery services, another industry that boomed during the pandemic and continues to do so.

That led to a number of them asking the St. Catharines Downtown Association not to continue the road shutdowns in the summer of 2023.

Since the association wasn’t seeing the huge numbers of pedestrians that they had initially hoped for, they simply told the city they would not be continuing the program this summer.

However, the association noted they did see decent numbers whenever there was a special event downtown, so they will be closing the street to traffic for a smaller handful of occasions this summer.

When the traffic shutdown began in 2020, it was held on Friday, Saturday and Sunday nights. In 2021, they scaled back, dropping the Sundays but adding James St. from St. Paul to King St into the mix. Last year, they kept the same hours.

However, the decision to leave St. Paul St. open to traffic this summer was hardly unanimous, as some businesses continued to enjoy foot traffic only.