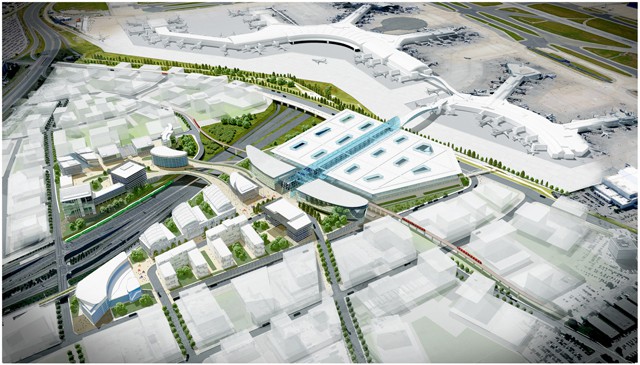 Today, the Greater Toronto Airports Authority (GTAA) made a big announcement at a Brampton Board of Trade luncheon.

The GTAA said it’s moving forward with plans for a regional transit centre (think of Union Station) to better connect the Pearson Airport area to “key employment and residential areas throughout the Greater Golden Horseshoe.” The proposed regional transit centre will also be home to airport passenger processing and security screening.

Preliminary concept plans were unveiled by GTAA president and CEO Howard Eng at the Brampton BOT’s State of the City event.

“Toronto Pearson is a world-class airport in every respect, and Southern Ontario is a diverse and dynamic region,” said Eng. “By the time New York and Chicago were the size that Toronto is today, they each had at least two major transportation hubs. Now is the time to ensure that better transit options are in place; otherwise we risk squandering the significant opportunities that are part and parcel of the exciting growth that the airport, the city and the region are experiencing.”

The need for the hub is pronounced–especially in light of a series of incoming transit projects. Also, as we recently reported, Pearson employs an enormous number of people from Mississauga and the overall Peel region and the lion’s share of those employees have to drive to and from work. There are, In fact, more than 300,000 people working in the zone that includes parts of Brampton, Mississauga and Toronto (that’s a lot of commuters).

Due to the lack of transit, the area generates more than 1 million car trips daily.

Now, onto the fun part!

The GTAA’s proposed transit centre, located on airport lands, will help boost use of public transit (something that’s currently underdeveloped and underutilized). The centre will potentially connect a number of transit lines that are already in development or have been proposed by various levels of government, including the Eglinton Crosstown West LRT, Mississauga Bus Rapid Transit, Finch West LRT, Regional Express Rail on the Kitchener line and Ontario’s High-Speed Rail concept.

As of now, the Union Pearson Express is the only rail-line connected to the airport.

“The vision for the area around the transit centre calls for improved streetscapes through sidewalks, landscaping, and improved lighting,” the GTAA news release reads.

The GTAA also announced that it has held preliminary discussions with all levels of government to “raise awareness about the opportunity for the regional transit centre at Toronto Pearson.”

Discussions on the future of the project should continue throughout the year.