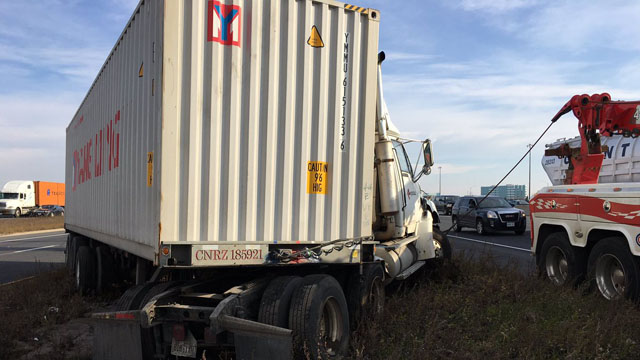 If you’re traveling on the westbound 401 near Dixie Road in Mississauga, prepare for potentially major delays.

According to Ontario Provincial Police Sgt. Kerry Schmidt, the transfer lanes between the express and collector lanes are closed due to a recent collision involving a car and transport truck.

“We’ve got the ramp shut down here, there’s no access to the collectors if you’re in the express,” says Schmidt in a recently released OPP Periscope video. “You may have to come back around to get to Dixie Road. It’s very slow in the area.”

Despite the disruption to traffic, the injuries sustained in the collision are–thankfully–minor. There is also damange to the roadway, as the transport truck hit a sign when it jack knifed.

Fire and emergency crews were on scene responding to the crash and a related diesel spill.

The express and collector lanes are open, but the transfer lanes are not.

The OPP reports that the driver of the transport truck has been charged with careless driving.

You may want to avoid the area for the time being.