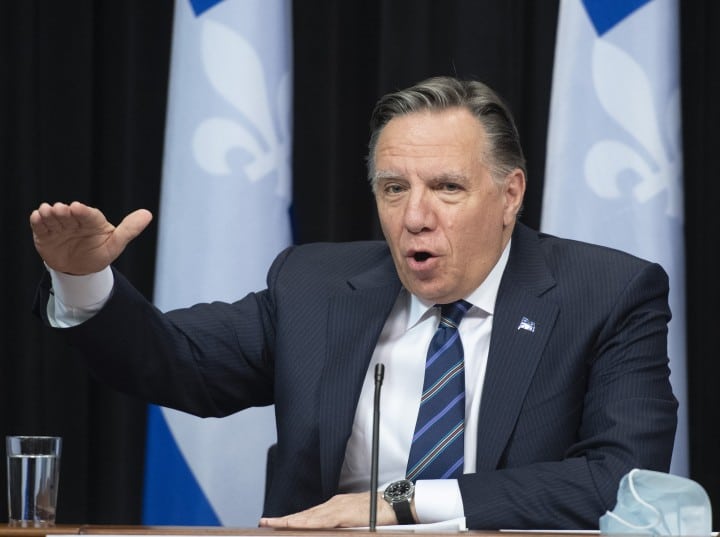 Working age Canadians have been hit hard by the escalating pandemic, and now they’re drawing a significant chunk of the blame, too.

British Columbia Premier John Horgan and Quebec Premier Francois Legault have been among those to suggest increasing infections and hospitalizations among younger age groups are at least partly because of failure to adhere to public health guidelines.

The message was quickly shot down by medical experts including Dr. Sumon Chakrabarti in Mississauga, Ont., who noted many of the most severely ill appear to be marginalized and essential workers in their 20s, 30s, 40s and 50s who work in congregate-work settings where the novel coronavirus spreads easily.

“People who work in factories… food processing plants, transport companies, warehouses — these people got hit in the first and second wave and they’re getting hit even harder in the third wave,” Chakrabarti said Wednesday.

“Think about a 28-year-old guy working in Purolator, or working in a food processing plant hearing that. ‘You’re saying that I’m blowing it for you?’ When we go into lockdown, which doesn’t affect any of these essential services, these are the people that we are relying on for food, for supply, for health care.”

“There are young adults – half of young adults, right now – (who) go see their friends, and do not respect the guidelines in people’s homes. That is very serious,” Legault said

That followed more pointed comments by Horgan on Monday that people between the ages of 20 and 39 were “putting the rest of us in a challenging situation.”

“Do not blow this for the rest of us,” he said.

Horgan qualified his reprimand Tuesday by saying he meant to catch the attention “of the few who refuse to follow the public health restrictions.”

But the suggestion nevertheless drew ire from medical experts on the ground, and combined with news of record numbers of intensive care patients in Ontario, reignited calls for more labour and workplace safety protections.

It also drew closer scrutiny of the numbers, which some said don’t necessarily suggest that the burden of the pandemic has shifted away from seniors.

Dr. Horacio Arruda, Quebec’s public health director, said Tuesday cases involving younger patients had been “masked” until now, and the shift in COVID-19 infections we’re seeing in some age groups is the result of an aggressive vaccine campaign targeting seniors.

“Now that we did protect elderly people, the virus is attacking the ones who are not immune,” Arruda said of hospitalizations and intensive care admissions.

Provincial data in Quebec shows a growing ratio of hospitalizations among patients aged 59 years and younger, rising to 34.5 per cent in March, up from 28.9 per cent in February and 25.5 per cent in January.

In Ontario, a science brief prepared for the province’s advisory table and posted online Monday found those 59 years old and younger accounted for 46 per cent of admissions between March 15 and 21 – up from 30 per cent of intensive care admissions Dec. 14 to 20, 2020.

“If we hadn’t immunized all of those individuals at this point in time we would be seeing the same sort of gong show happen with that population as (in) the first couple of waves,” said Wong, adding that more infectious variants underscore the need to vaccinate at full capacity so that doses can reach each priority group as quickly as possible.

“The vaccinations have helped dramatically in terms of protecting our super-vulnerable populations.”

Federal data shows those over the age of 60 now make up more than 95 per cent of deaths.

Last week, B.C.’s health officer Dr. Bonnie Henry drew a distinction between the proportion of COVID-19 cases among those aged 19 to 39 – which are rising – and the hospitalization rate for that age group, which remained low and stable.

Wong acknowledged that COVID-19 fatigue seems to be a factor, too, and that could afflict younger age groups more significantly.

He noted those in their 20s and 30s were not seen as especially susceptible to severe illness for much of the pandemic. That’s a tough message to change now, even as overall case counts in this group rises, he said.

“It’s hard right now to know how to message in a way that’s effective, that really is going to ring true to people. It’s just hard because everybody is tired. I mean, I’m tired. I am really tired,” said Wong.

— With files from Jacob Serebrin in Montreal and Laura Dhillon Kane in Vancouver.