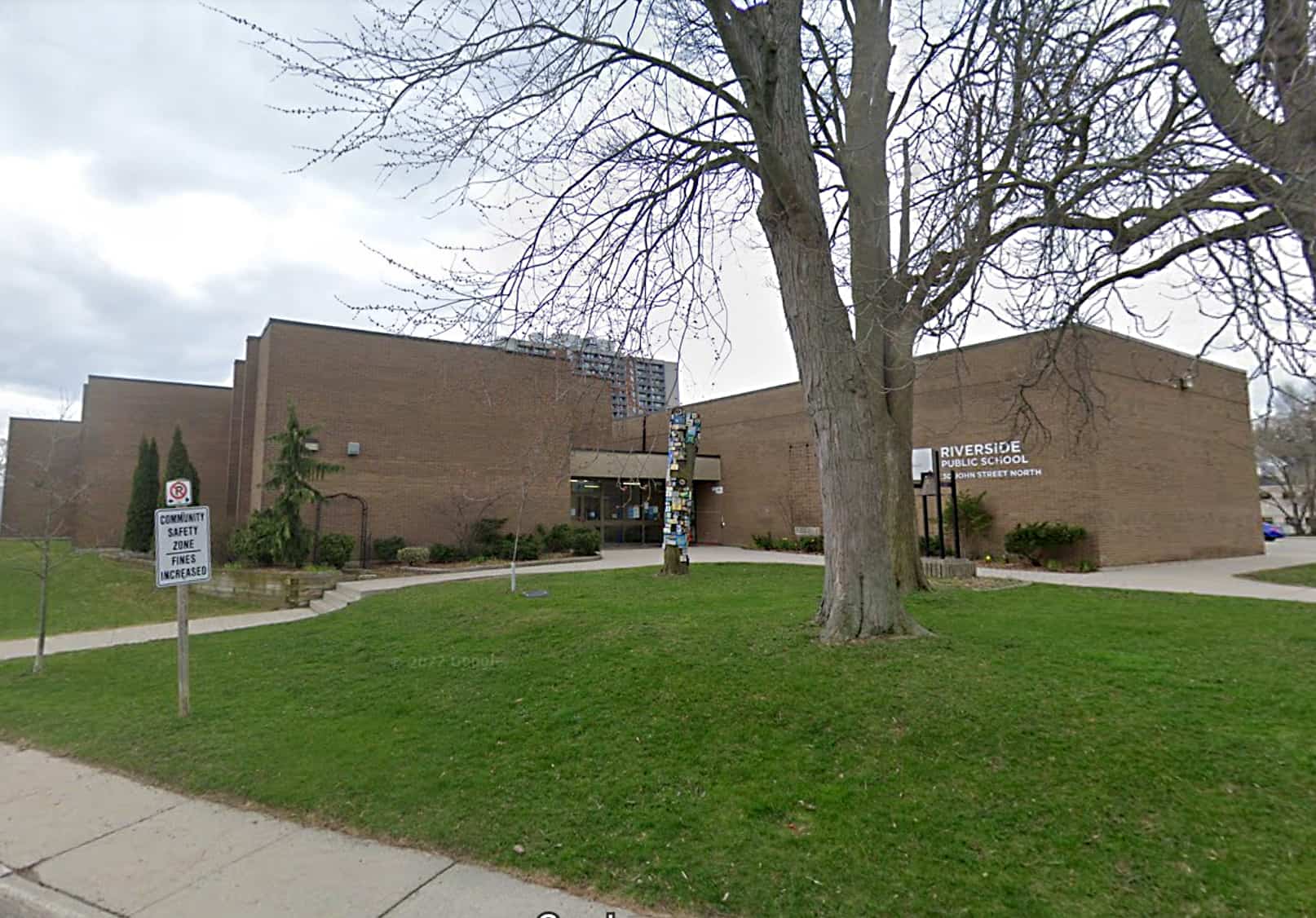 A Mississauga parent says her son was sent to a padded isolation room at school several times without her knowledge, and she wants to raise awareness about the use of these rooms.

Margaret Hodgson says her oldest son was sent to the room at Riverside Public School in Port Credit before the pandemic. She only heard about it later because her son was frustrated with online learning. Asking to return to in-person school, he said, “‘I just want to go back to school. I’ll even go in that room they put me in,'” she says.

In March of 2021, her son, along with a school superintendent, took Hodgson to the room at Riverside. She says the room was accessed through a classroom for students with autism. She describes it as a “completely padded room, from floor to ceiling, wall to wall.”

“I saw this room,” says Hodgson. “I was absolutely floored because he was in it by himself. And he could not see the staff on the outside of the door.”

The padding made it impossible for her son to see out the window in the door, she says.

Now in Grade 4, her son was nearly non-verbal and had intermittent hearing loss when he started school. He was diagnosed with ADHD (attention-deficit hyperactivity disorder), and all three of Hodgson’s children also have diagnoses of autism at different levels.

“And as a result of these things, he was exhibiting behaviours because he couldn’t communicate with the staff on a level that they could understand,” she said.

He would sometimes leave the school, and other times school staff would call Hodgson and ask her to pick him up. His classmates also teased him because he carried a blanket, and he would sometimes push kids when he couldn’t get help.

He was supposed to be getting support, but a speech-language pathologist service was cancelled for unknown reasons.  Instead, the school appears to have dealt with her son’s issues by removing him.

“My son was isolated in a padded room on multiple occasions without my knowledge and subsequent denial from school staff,” she says. 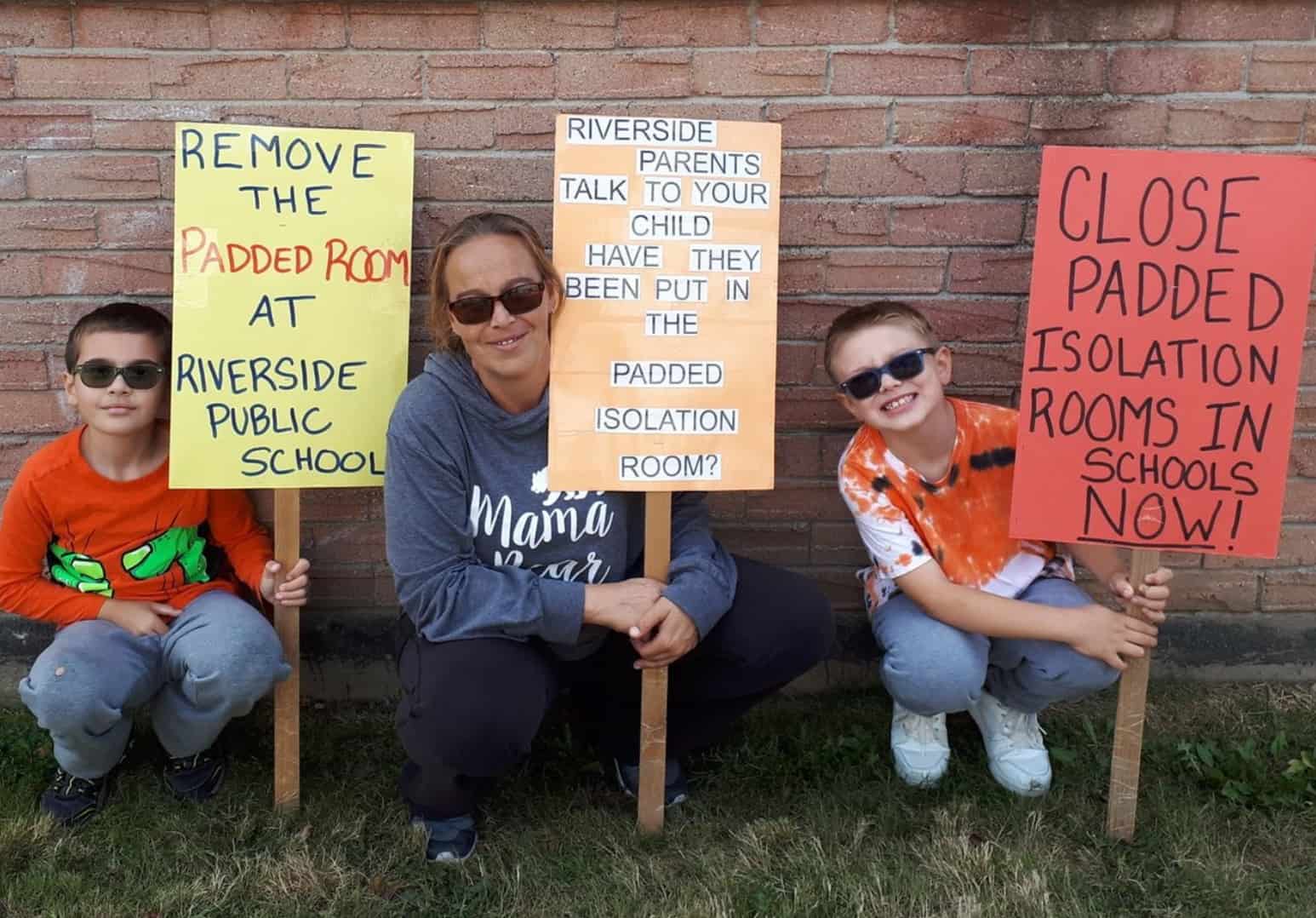 Margaret Hodgson and her two sons went out in Port Credit to protest the padded room at Riverside Public School.

The Peel District School Board won’t comment on Hodgson’s complaints, citing privacy issues, but they say there are “Alternative Learning Environment Calming/De-Escalation” rooms in some schools, including Riverside, board spokesperson Malon Edwards tells insauga.com in an emailed statement.

The rooms can have cushioned walls, floors, and doors for safety, Edwards says. The Peel District School Board has 61 schools with these features in a room.

In some cases, the rooms are used voluntarily, meaning students can choose to go there to calm down, but in other cases, they are used to de-escalate a situation.

“In situations where a student needs to be temporarily separated from the main classroom environment to ensure the safety of the student, other students, and staff, the room may be used for de-escalation,” Edwards says.

While Hodgson says she wasn’t informed about the room, Edwards says parents should be involved in student plans.

“When a room is being used for de-escalation, it must involve an intervention plan developed collaboratively through the Student Review Process in consultation with a psycho-educational consultant and parents, and must be documented in the student’s Individual Education Plan and Safety Plan,” Edwards says.

“Parents or caregivers also have the option to decline their consent. If a parent or caregiver declines consent, a safety plan for the student must still be developed by the school.”

This isn’t the first time parents have complained about isolation rooms. A 2016 Toronto Life story documents traumatic experiences from several parents, including one from Mississauga.

There have been attempts to ban isolation rooms in Alberta, British Columbia and most recently, Ontario.

Autistics for Autistics (A4A), an advocacy group for autistic people in Ontario, called for a ban on seclusion in schools and supported a private members bill from former MPP Michael Coteau.

A4A describes situations where children as young as six years old in Ontario public schools are “locked in closets with chairs pushed against the door or kept in soundproof rooms with no way out nor to communicate–and no food or water for hours on end, sometimes day after day.”

Bill 160, which calls for the abolishment of seclusion rooms, got to the legislature in December 2019 but was lost in the shuffle when the pandemic started. Then, Coteau resigned from the Legislative Assembly of Ontario in 2021 and won a bid for MP of Don Valley East.

Anne Borden, media liaison with A4A, says they are working to get the bill back on track. They got involved when some parents approached them looking to get the rooms banned.

Although the rooms are seen as a way to “de-escalate” a situation, Borden says they just don’t work.

“If anyone, dealing with overwhelming emotions, was shut in a windowless room, locked in with no way to get out, they won’t feel calm,” she says.

“It’s not how I calm myself down. It’s not how you calm yourself down,” Borden says. “Why do we think it’s going to calm the children? It doesn’t calm them down, what it does traumatize them, and it makes them more upset.”

She suggests finding out why the student is upset in the first place and says some students get aggressive because they haven’t received the help they need.

“An example would be a kid who can’t speak, not being given devices to allow them to communicate,” she says.

Teachers are not getting the proper training and are left without the resources needed to help kids.

“So the real solution to solving this is to make some pretty substantial changes to the special education environment itself,” she says. “And so that it’s not a combative relationship between teachers and students. And it’s not a prison-like environment for students.”

Another problem is the lack of data collection.

“One way that we have to address the problem is to collect the data and find out how many times kids are being put in these rooms,” she adds.

“…it is imperative for Canadian educational leadership on this issue to be expanded, and for regulation that aligns with human rights standards to be enacted,” the study concluded.

As for Hodgson, both her sons are now doing online learning.

“I want them in a physical school,” she says.

Only her daughter attends school in person, and she fears her sons are missing out on much-needed socialization with kids their own age.

She just wants the room gone.

“If that room disappears, I don’t have to fear anybody putting him in that room.”