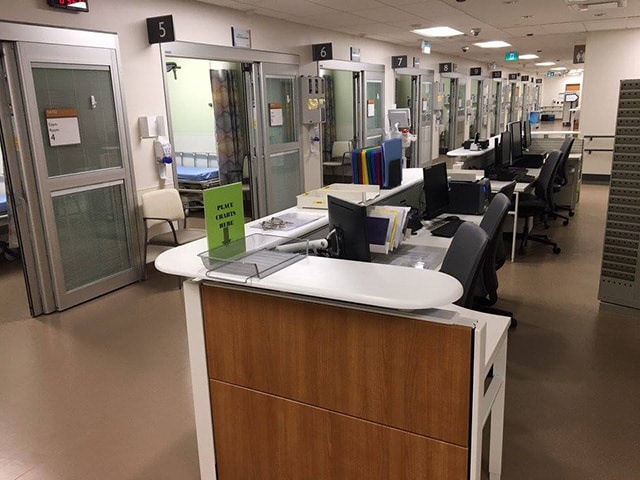 No one wants to end up in the hospital, but if you do, it’s ideal if your experience is as quick and courteous as possible. However, that may not always be the case.

No one wants to end up in the hospital, but if you do, it’s ideal if your experience is as quick and courteous as possible. However, that may not always be the case. Despite petitions and room in the Ontario budget to reduce overcrowding at Brampton Civic in particular, occupancy rates don’t seem to be getting any better.

This year has definitely been one of overcrowding and often unpleasant experiences at Brampton Civic Hospital. If you recall, for instance, back in March, Jamie-Lee Ball was stuck on a stretcher in a busy hallway for five days in extreme pain and suffering from internal bleeding. According to the Ontario NDP, that kind of overcrowing at Brampton Civic isn’t getting better – it’s getting much worse.

Ontario NDP leader Andrea Horwath has released a statement saying that, this year alone, occupancy rates in acute care stuck at over 100 per cent and reaching as high as 109 per cent at Brampton Civic.

In Ball’s experience, the hospital was overcrowded to the point where there were not enough pillows available for patients. However, it appears staff was doing their best with their available resources. Code Gridlock was in effect at the time, which means the hospital was overcrowded. Last year alone, Brampton Civic had 10 Code Gridlocks, according to according to NEWSTALK 1010.

“Too many Bramptonians know firsthand that the day Brampton Civic Hospital opened, it was already overcrowded,” said Horwath.

Though Ball launched a petition for the province to fund more hospital beds in Brampton and the province planned to invest $451 million in the Peel Memorial Centre for Integrated Health and Wellness, overcrowding is still an issue at this point in time.

The number of funded beds at Brampton Civic Hospital is about half of the provincial average of 2.3 beds per 1,000 people. Current census data shows that the city boasts a population of 593,638 (a notable increase from the 523,906 it clocked in at in 2011). As of May 2017, there were only 608 beds available, though to support our population (and its constant growth), we would need well over 1,000.

That average is lower than anywhere else in Canada, according to a health-care advocacy group, Ontario Health Coalition (OHC).

With that in mind, according to Horwath and the Ontario NDP, Brampton Civic Hospital’s Acute Care and Mental Health beds operated above safe capacity throughout 2017.

“These aren’t just numbers. These are Ontarians left waiting in pain on stretchers in hallways, with no privacy and sometimes, not even any food,” said Horwath. “Hallway medicine and long wait times are potentially dangerous, they’re painful, and they’re stripping Ontarians of their dignity.”

The Wynne government’s next line of action on this issue remains to be seen.