Over 9000 took to the streets of Mississauga 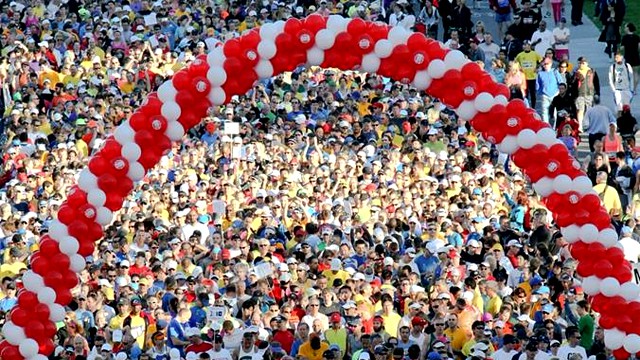 The Mississauga Marathon celebrated its 10th Anniversary this weekend as 9,148 runners took to the streets of scenic Mississauga.

“We are thrilled to celebrate the 10th anniversary of this great running event in Mississauga ,” said Ben McCarty, Mississauga Marathon Race Director. “Offering a variety of distances and races, we are proud to cater to elite marathon runners as well as the first time 2K participant.”

This year, 70 participants were recognized as ten-time runners, having participated each year since the event’s inception in 2004. Ten-time runners received recognition for their dedication and commitment to the run with unique race bibs, special Under Armour shirts and had their names announced at the start of their race.

The Mississauga Marathon is truly a community event. More than 1,500 volunteers contributed to the success of the weekend, while thousands of spectators showed their support along the running route with water, banners and cheering squads. The finish line at Lakefront Promenade Park offered live music and entertainment for all runners, friends and families.

Under Armour technical shirts were back by popular demand this year for runners participating in the Full Marathon, Petrillo Law Relay Challenge, Recharge with Milk Half Marathon and Valeant Pharmaceuticals 10K Run or Walk.