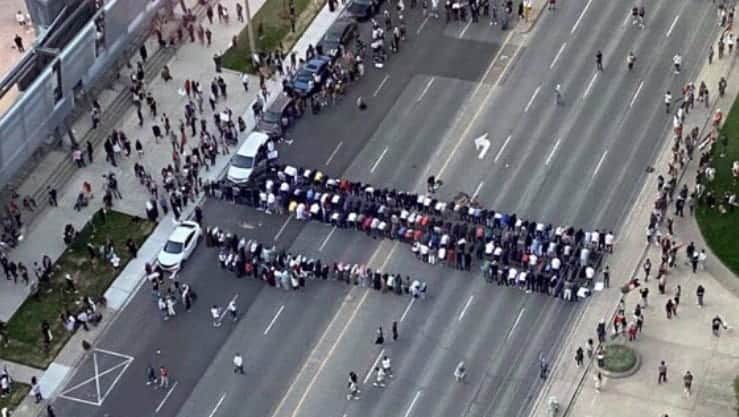 Opponents of loud and prolonged demonstrations along the streets of Mississauga won’t be getting relief any time soon.

By-law enforcement staff for the City of Mississauga say recent demonstrations in the City Centre have become too large to enforce COVID-19 and noise infractions, but otherwise no laws are being broken by the protesters who have the right to do what they are doing.

A discussion during a City committee meeting today (May 26) focussed on the number of complaints councillors have received about demonstrations that have been taking place in the City Centre, particularly the one held on May 18. While councillors tried to avoid naming the group involved in the demonstration, it involved those who support Palestine over recent military conflicts with Israel.

Ward 9 Councillor Pat Saito acknowledged that complaints have been coming in especially concerning the potential spread of COVID-19 during these well attended rallies. But she understands the motive behind the demonstrations.

“Many of these protests, not all of them, are for very good causes. People have the right to protest innocent children being killed,” said Saito. “You don’t need to take sides on things that are happening beyond our city and beyond our country but you have to respect people’s concerns about what is happening in the world. Having said that, it is our job to take a look at people protesting and make sure they are doing it safely.”

Dan Ulrich, Manager of Security Services for the City, said the protest on May 18 was attended by 20,000 people as determined by police drone surveillance of the event.

He went on to say the size of the crowd changed the dynamic of what by-law officers and Peel Police were able to do.

“Ourselves and Peel Police were vastly outnumbered,” Ulrich said. “There was no COVID enforcement to be done that night. Our job just was to secure our building, secure City Hall. It was a success that we had that many people, with no major incidents, no injuries, and our building was maintained. That was a win.”

Ulrich pointed out that even though laws are not enforced during protests it doesn’t prevent charges from being filed afterwards. He said that possibility still exists from the May 18 event and the investigation continues.

He said while police and bylaw officers have been “hands off” during protests for safety reasons he pointed out that follow-up investigations are effective as real-time confrontations can incite crowds.

“We had 20,000 people that night,” he said. “Even with a small crowd of 50, 60 or 70 people it can be a problem. It’s all about social media moments and that is what they want. They (demonstrators) want that interaction filmed with our officers or Peel officers giving tickets on site. It’s better to do after the fact.”

Ward 7 Councillor Dipika Damerla said residents in her area complained of noise well into the night during the demonstration stating the fireworks were shot off and cars were honking their horns past 11 p.m.

Ulrich responded saying that once City facilities were secured and the demonstrators moved onto Burnhamthorpe Rd. the crowd because a police matter and again stressed that the sheer number of participants made it impossible for officers to make arrests or file charges.

He said that ultimately by-law officers and police don’t have the authority to shut down protests, rallies and demonstrations because of rights guaranteed under the Canadian Charter of Rights.

“We can’t prevent them from happening,” he said.

(Photo: Demonstrators kneel in prayer along Burnhamthorpe Rd. in the City Centre on May 18)