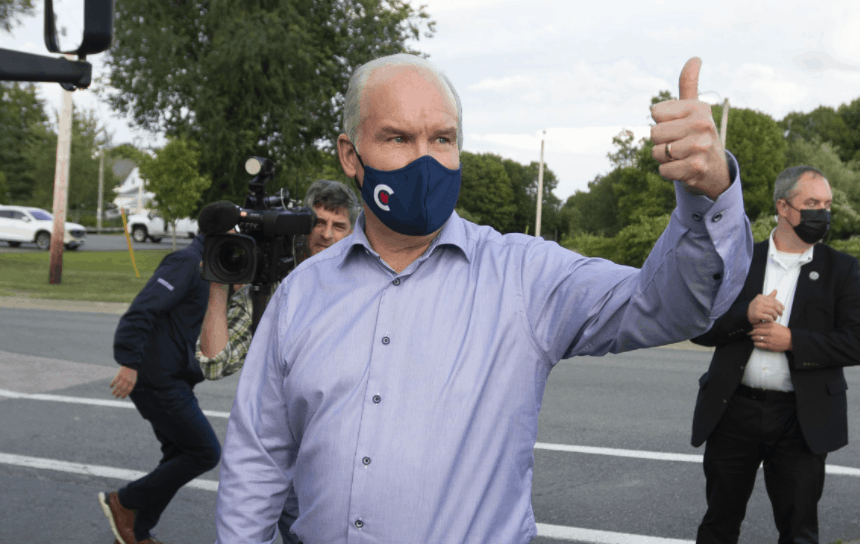 OTTAWA — Erin O’Toole warned supporters Saturday that they’re not welcome on the Conservative campaign if they engage in harassment and intimidation of other party leaders.

The leader’s warning came one day after several Conservative campaign workers were spotted among a crowd of raucous protesters who forced the cancellation of a Liberal event featuring Justin Trudeau in Bolton, Ont.

Seeback issued a statement late Friday saying those individuals are no longer welcome on his campaign.

NDP Leader Jagmeet Singh also condemned the protesters, saying no one should have to cancel an event over safety concerns.

O’Toole insisted Saturday there’s no room in the Conservative campaign for negativity.

“We’re running on a positive campaign for the future of this country,” he said during a stop in Fredericton.

“I strongly condemn any form of harassment and protest the like we’ve seen. We’re a democracy, we should be having a healthy and respectful debate of ideas and we have no time for people who bring in negativity to campaigning.”

O’Toole appealed to everyone to “put the country and our democracy first” and said that’s the behaviour he expects from “every single member of our team, from the leader to the first time someone’s volunteering.”

Trudeau has been dogged by protesters throughout the campaign, most of them voicing angry opposition to mandatory vaccinations, masks and lockdowns that have been implemented to prevent the spread of COVID-19.

A planned event in Bolton on Friday evening was cancelled because, Trudeau said later, the RCMP determined that it could not keep attendees safe.

Questions have arisen over who is organizing and potentially funding the protesters.

One man who showed up to heckle Trudeau at an event in Hamilton earlier in the week, turned up the next day at a Trudeau event in Surrey, B.C. He declined to give his name but when asked by reporters if someone was paying him to follow the leader around the country, he said, “Maybe.”

The Liberal campaign has been avoiding making the specific location of many Trudeau events public, partly to limit the number of their own supporters who show up during the pandemic but also to curb opportunities for protesters to organize.

But protesters appear to be mobilizing through social media, using the Twitter hashtag #hateclub and Facebook groups such as “Ontario Protests and Freedom to Assemble Information Page.”

The purported “administrator” of that page is a Barrie, Ont., woman who posted a message Friday detailing the time and location of Trudeau’s Bolton event and inquiring whether anyone was “going to heckle” him.

She did not return phone calls Saturday.

A person using the #hateclub hashtag wondered on Twitter whether someone was going to punch Trudeau in his “communist face.”

Some Liberal supporters on Twitter drew a link Saturday between that kind of sentiment and Conservative ads on social media, which feature a boxer punching through glass with the tag line “fight back for Canada’s recovery.”

But O’Toole, who has rejected Trudeau’s calls for mandatory vaccinations for everyone in federally regulated workplaces and for a federal fund to help provinces create vaccine passports, rejected suggestions that he shares some responsibility for inflaming protesters.

He reiterated that he encourages all Canadians to get vaccinated but respects their personal choice.

“We will always respect people making their personal health decisions,” he said, adding that he will similarly honour provinces’ right to decide whether to create so-called passports that would enable people to show proof of vaccination.

At least some of the protesters appear to share views with supporters of former U.S. president Donald Trump, seemingly importing many of the conspiracy theories prevalent among his followers that led to last January’s violent assault on the U.S. Capitol.

In a live videostream of the Bolton event, protesters can be heard calling Trudeau a criminal, a communist, a murderer and a pedophile and berating police for being “pedophile protectors.”

In the video, posted on Facebook by a self-identified American woman, a woman can be heard saying that if Trudeau wins the election, it will be because it was “rigged.”

Despite their professed concern about exploitation of children, some of the protesters were accompanied by their young kids and can be heard laughing when one little girl shouts “F— Trudeau,” echoing the chant of adults around her.

Earlier in the week, during Trudeau’s event in Surrey, one protester yelled at Trudeau, “We will end you” while another shouted that no one wants him to breathe.

The number and vigilance of police in Trudeau’s security detail have visibly increased during this campaign. The Liberals declined to comment on security arrangements.

The RCMP, who are responsible for the prime minister’s security, said in a statement Saturday that throughout the campaign, the force “undertakes risk and threat assessments on an ongoing basis and adapt its security posture accordingly.  However, from a security standpoint, we will not disclose such information.”

The Mounties added: “Public order is the responsibility of the local police of jurisdiction. Police will respect individual’s rights to freedom of expression and demonstration in a lawful manner. In the event of any unlawful acts, including public order issues, police will respond in an appropriate and professional manner in accordance with the law.”

Trudeau is not the only politician to be targeted.

In the past two weeks, Rempel Garner said she’s been chased down the street by two different men with cameras demanding her response to “conspiracy theories.” On Friday night, she said she and her husband were “accosted by a large man who aggressively approached us” while dining at a restaurant.

“I have also received a death threat from someone who called my office in escalating states of verbal abuse over the course of days,” she said.

“This meant I can’t advertise the location of my campaign office. I can’t attend public events where my attendance has been advertised. I’ve had to enhance security measures. I’m on edge and feel fear when I’m getting in and out of my car, and out in public in general.”

Rempel Garner suggested legislation may be necessary to enhance the ability to prosecute “criminal harassment.”

Singh also spoke out against the toxicity of Friday’s protests against Trudeau.

“That should never have happened. And that’s wrong.”

Singh attributed the increasingly threatening behaviour of protesters at least in part to the pandemic.

“Yeah, there’s definitely a problem … with folks that are feeling maybe anxiety, maybe worry. They’re in a precarious situation, it’s been a tough pandemic and so that might be a reason why people are feeling tense and feeling frustrated,” he said.

But Singh said he’s encouraged by the fact that the “vast majority” of Canadians are united in getting vaccinated and wanting to “take care of one another.”

He reiterated his call for a national vaccine passport.

Trudeau took a day off the campaign trail Saturday. But the Liberals unveiled two new ads, in one of which the Liberal leader doubles down on his criticism of O’Toole’s stance on mandatory vaccinations.

“I believe that vaccines should be mandatory for travel on planes and trains, because that’s how we’ll protect our kids and get back to normal,” he says in the ad, which features a clip of Trudeau receiving his own jab.

“Conservative politicians say they would scrap our plan and won’t even require their own candidates to get vaccinated. This is no time to back down from doing the right thing.”

On Friday shortly after the Bolton event was cancelled, Trudeau told reporters he’s never seen such a level of intense anger before.

“I think this is something that Canadians, all of us, need to reflect on, because it’s not who we are,” he said, adding that everyone has had a difficult year.

“Those folks out protesting, they had a difficult year too, and I know and I hear the anger, the frustration, perhaps the fear,” he said.

“I know we have to work even harder to be there for each other, to support each other. We need to meet that anger with compassion.”

The federal election is scheduled for Sept. 20.