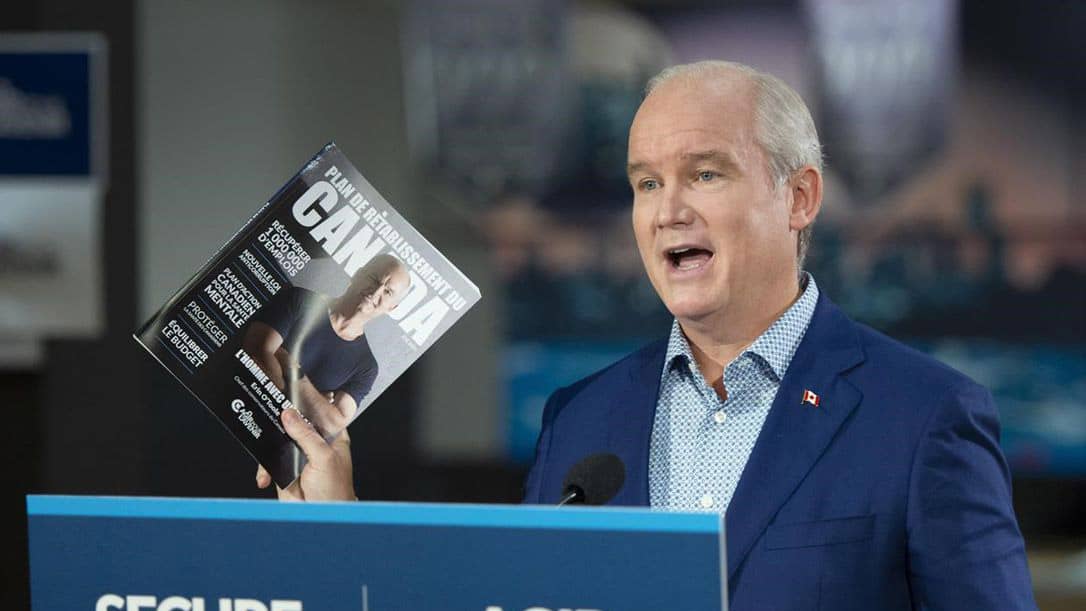 SAINT-HYACINTHE, Que. — Federal Conservative Leader Erin O’Toole did not distance himself Sunday from comments made by a longtime member of his caucus who warned constituents the Liberals are preparing for a “climate lockdown.”

But the party later said Cheryl Gallant has removed a video she posted in June that included a photo of Liberal Leader Justin Trudeau appearing to have some sort of noose around his neck.

“In light of events unfolding today, it’s understandable how this photo can be misconstrued without context,” party spokesman Cory Hann said in an email. “That’s why Ms. Gallant has removed her video.”

Gallant is running for re-election in the Ottawa Valley riding of Renfrew-Nipissing-Pembroke for the eighth time.

The events Hann referred to were angry crowds of anti-Trudeau agitators who have disrupted his campaign events in recent days, often hurling expletives and  threatening violence. Their actions were deemed a threat too great to proceed with Trudeau’s planned rally in Bolton, Ont., Friday and delayed his Sunday event in Cambridge, Ont., for more than hour as they surrounded his campaign buses shouting slurs and profanity.

At the Cambridge event, one person carried a sign with a manipulated picture of Trudeau about to be executed by hanging.

Hann said the photo Gallant used was one Trudeau had posed for himself, recreating a 1968 image of his father, prime minister Pierre Trudeau, who had pretended to hang himself with his own tie at a press club event.

“How long do you think it will take before the Trudeau Liberals start calling for a climate lockdown?” Gallant asks in the video.

“Trudeau is counting on Liberal-minded Canadians not looking too closely at his agenda. If they did, they might realize Trudeau’s a con man and climate change may be his biggest grift,” she said.

Gallant also sent correspondence to her constituents before the election started, asking them if they were in favour of a “climate lockdown.”

O’Toole was asked multiple times Sunday if he agreed with Gallant’s statements or the anti-climate change sentiment behind them and did not once answer the question.

In an interview on Radio-Canada on Sunday evening, O’Toole was pressed to say whether he denounced Gallant’s statements, but he once again skirted the issue.

“I have expectations of all our candidates… that they have a positive approach to the campaign,” he said in French.

In another instance during the interview, O’Toole said each of his party’s candidates supports the plan he’s put forward, which includes a plan to tackle climate change.

Earlier Sunday, he said Canadians are tired of lockdowns and reiterated his focus is on talking to residents about his party’s plan to help the country’s economy recover from the COVID-19 pandemic.

“We’re not running on things that were said five months ago, five years ago,” he said.

Gallant did not immediately respond to request for comment.

The only response came from a tweet she sent Sunday evening.

“I’m proud to run on Canada’s Recovery Plan, in its entirety,” she wrote, referencing the name of the Conservative platform.

O’Toole has denounced the angry crowds that have dogged Trudeau, and told four Conservative volunteers who appeared in the crowd in Bolton Friday that they were no longer welcome in the campaign.

On Sunday, Trudeau pointed to the noisy crowd trying to intimidate and drown out his event as proof O’Toole needed to condemn Gallant’s comments to show her supporters and protesters that they are wrong.

“We know they don’t listen to me,” he said. “Perhaps they will listen to Erin O’Toole if he tells them that climate change is real. If he tells them that vaccines are safe and secure and demonstrates with real leadership, how we’re going to move forward as a country to be safer, to be better and more prosperous.”

“That’s the choice that Erin O’Toole needs to make right now around Cheryl Gallant and all of these conspiracy theories being peddled.

The incentive dubbed the “Rebuild Main Street tax credit” would allow individuals who invest up to $100,000 in a small business to claim a 25 per cent tax break over the next two years. O’Toole also pledged to offer loans of up to $200,000 to small and medium-sized businesses.

O’Toole also spoke to a crowd of 180 masked Conservative supporters in Trois-Rivières, Que., championing the party’s plans to support the province where it hopes to pick up seats from the Liberals and Bloc Québécois.

Climate change has long been a thorny issue for O’Toole and the party he leads.

In March, Conservatives rejected a motion to declare climate change as real during the party’s convention, a result O’Toole said was a distraction.

He later released a climate platform that for the first time saw Conservatives include some form of carbon pricing.