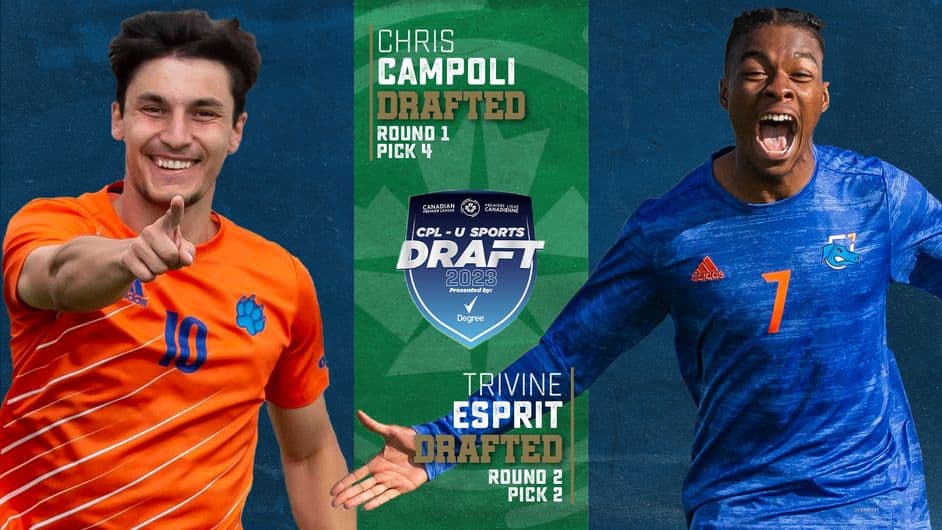 Ontario Tech’s Christopher Campoli, the U SPORTS player of the year, was drafted fourth overall in the CPL-U SPORTS draft on Thursday night by York United FC.

This is the third time Campoli has been selected, the second time by York. He was also selected in 2022 by HFX Wanderers FC. Fellow OUA all-star Trivine Esprit was also drafted by York United, being picked in the second round, 11th overall.

“I was with my family as I saw my name get called, there was nothing but excitement and happiness from my end because it meant everything to me,” said Esprit. “Being able to have that experience with my family was great. Now the next step is just getting ready to impress and preparing myself to show the best me possible once I get to preseason.”

Esprit is not the only member of his family who can call themselves a student-athlete. His older brother Tristan played soccer at Cornerstone University in Michigan, and his sister Trinity is currently a third-year defender for the Ottawa Gee-Gees women’s soccer team.

Campoli’s selection comes after a record year with the Ridgebacks. A third-year finance student, he led the Ridgebacks offence this season with 13 goals in 11 matches. This put him atop the OUA and placed him second in the nation. Not only could he score, but Campoli also led the OUA in assists with six, while also finishing second in Canada.

“This is obviously a great opportunity to play professionally close to home where I grew up,” said Campoli. “Every time I came back to school I came back motivated and tried to prove people wrong and I will continue to do so.”

This season he was recognized as the OUA East MVP, a first for the Ontario Tech soccer program. For the second time, he was named a first-team all-star, a feat he previously achieved in 2019. He followed the provincial recognition by receiving the Joe Johnson Memorial Trophy, presented to the U SPORTS player of the year in men’s soccer as well as a first team All-Canadian.

Esprit, a first-year kinesiology student, was named a second team all-star in his rookie campaign with the Ridgebacks. In the midfield he was key to the Ridgebacks offensive flow through the middle. He ended the season with a goal and an assist but was also key to creating opportunities for the Ontario Tech offence to be successful in the opponents third of the pitch.

After an impressive 11-1 regular season record, the Ridgebacks suffered a heart-breaking 2-1 penalty kick loss to the Nipissing Lakers in the OUA quarter-final. Esprit says this loss will stick with him.

“It’s something that I honestly won’t forget for a while. Knowing how the season came to an end and knowing we were capable of making it much farther into the championship is what hurts the most,” Esprit said. “That’s football, though. It doesn’t always go your way. How we move forward is what matters.”

This is the fifth CPL-U SPORTS draft in advance of the league’s fifth season. The 2022 season concluded with Forge FC (Hamilton) winning their third title. The CPL is Canada’s professional men’s soccer league that debuted on April 27, 2019. Playing in world-class and unique venues, and partnering with strong community-styled ownership groups, the CPL is a league for Canadians by Canadians that brings professional soccer to communities coast-to-coast.