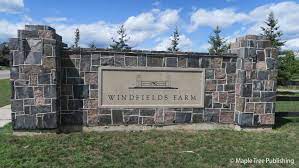 A new community centre may be in the future in Oshawa’s growing north-west corner, with a pool, library and senior’s centre among the amenities on the wish list.

The Windfield’s Community Park will be located on a 33-acre city-owned parcel of land on the east side of Thornton Road, north of the future Britannia Road extension.

The City has budgeted $31 million for the project, with most of the funding coming from development charges, plus another $12 million for the library. No timeline has been established yet for construction, though it is likely to be at least five years before shovels hit the ground.

“This is great news for Oshawa,” Mayor Dan Carter said this week. “We’re moving on to the future.”

A future community centre to serve north Oshawa has been recommended in the Parks Recreation Culture and Library Facility Needs Assessment for some time, with the Oshawa Library Board declaring it needs a new library in the next five years.

Priorities for the community centre start with the pool and senior’s centre, according to a staff report. A gymnasium, fitness centre and youth centre are also on the list, contingent on Oshawa reaching the 185,000-population mark.

The Needs Assessment study recommended an 18,000 square-foot library be built when the Oshawa’s population reaches between 185,000 and 197,000.

Oshawa’s population is currently 175,000, with “significant growth” expected in the area over the next few years. Phase II of the Windfield housing development, which will abut the proposed community centre, is expected to add 13,000 to the city’s numbers all by itself.

Most of the land in the development was once part of Windfield’s Farms, Canada’s premier thoroughbred racing operation of the last century and the burial site of Northern Dancer, the 1964 Kentucky Derby winner.

Staff will report back to a future Council meeting on the business case for the components/amenities to be in the proposed community centre, as well as the financial implications.