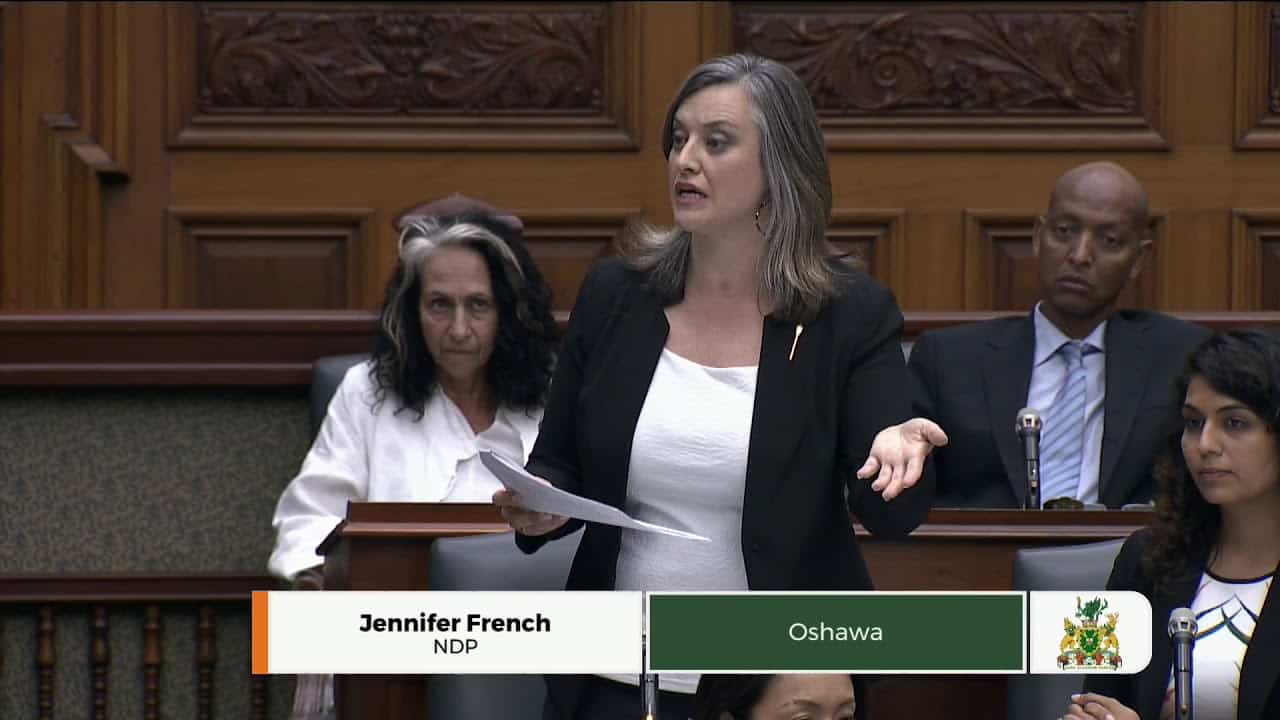 Oshawa MPP Jennifer French is throwing her lot in with Marit Stiles, the only candidate currently running in the election to become the new Ontario NDP leader.

The campaign to replace long-time NDP leader Andrea Horwath kicked off hours after the party’s defeat in the 2022 Ontario election. The NDP performance on June 22 shank compared to the previous election, losing nine seats.

Horwath announced her resignation the evening of the election saying she would step down as soon as an interim leader was tapped. Horwath had led the party since 2009, and had served as Hamilton Centre MPP since 2004. She later successfully ran for Hamilton’s mayoral chain that fall.

Peter Tabun, MPP of Toronto—Danforth was tapped to lead the party while they ramped up to a leadership election. The leadership campaign started shortly after on June 28 with nominations open.

However, so far only one person has put their name in the running, Marit Stiles MPP of Toronto’s Davenport riding. Stiles was a research director for the film union, ACTRA. She entered politics in 2014 by claiming a trustee’s seat on the Toronto District School Board.

She entered Ontario politics for the 2018 election, unseating the Liberal incumbent Linda Martins. Stiles was the second NDP MPP in Davenport after Jonah Schein’s 2011 win. The riding has otherwise been a Liberal stronghold since its inception in 1999.

Stiles served her first term as the Official Education Critic. Following re-election she announced a run for the leadership on September 22. She released her campaign platform to create a stronger NDP on December 1.

Since she entered the race Stiles as been endorsed by nine sitting NDP MPPs including;

Another voice was added to the choir on November 2 Oshawa MPP Jennifer French. On Stiles French said, “As a former educator, I have appreciated Marit’s commitment and passion when it comes to strengthening public education and public services.”

“As someone who has worked alongside her through the years, I know that she gives her all on behalf of real people. She has been a fighter, and I know when she leads us into government, that she will be the strong and resolute champion Ontario needs for a positive and hopeful future,” she continued.

French has represented Oshawa since 2014 narrowly holding the seat by nearly 750 votes in the last race. Her time in Queen’s Park has largely been spent as the critic for infrastructure.

French used this position to roundly condemn the tolls formerly in place on Hwy. 412 and 418. During the last term, she put forward several motions to remove tolls, all of which were defeated by Doug Ford’s Progressive Conservative majority government.

Ford removed the tolls during the 2022 election campaign mere months after Transportation Minister told Question Period such a move was impossible the last time French brought it up.

French has also made headline for her criticism of the Ford’s government’s handling of COVID-19 in long-term care facilities (LTC). Privately run facilities in Pickering, Brampton and Toronto were so poorly managed the Canadian Armed Forces (CAF) had to be called into alleviate the situation.

The Pickering home, Orchard Villa, is up for a potential license renewal and large investment, which French and the NDP have fought against. Orchard Villa lost 85 of its 230 residents, more than a third.

These fights have earned French high parise from Stiles who said of her colleague, “Jennifer always stands up for her community and our province.”

“She fought alongside local auto workers to defend good jobs, she stood with the families of Orchard Villa when Ford wanted to renew their license despite the tragedy in the home, and now she is out there fighting back against Ford’s attack on the Greenbelt in her region.” she continued, “Jennifer’s tenacity makes her a great MPP, and I’m glad she’s on the team as we start this exciting new chapter for our party and our province.”

The NDP nomination period ends on December 5. Should others join the race the party will elect its new leader in March. Niagara Falls MPP Wayne Gates is mulling a run, but has not officially declared.