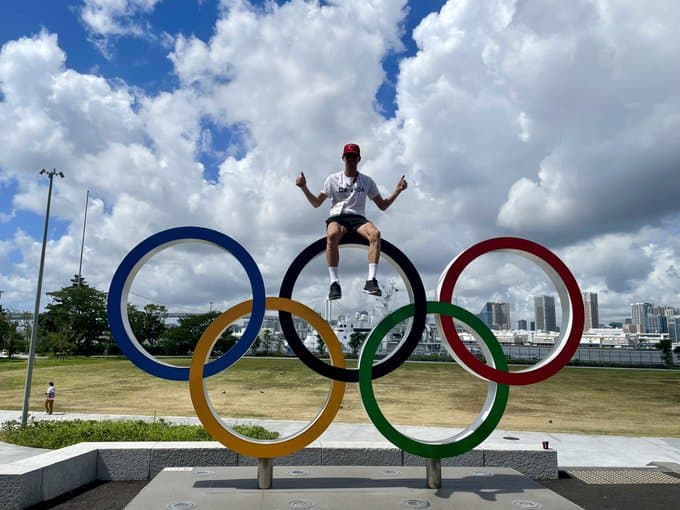 “Just a kid from Oshawa” was the simple post on Twitter from Matt Hughes, the 31 year-old middle distance runner from Paul Dwyer High School.

The picture accompanying the post tells a bigger story though, showing Hughes sitting on top of an Olympic Rings statue in Tokyo, the day after he finished sixth in the Olympic final of the 3,000-metre Steeplechase.

His achievement was massive, especially in an event that has been dominated by runners from African nations. Moroccan Soufiane El Bakkali won gold this year, breaking a streak of nine straight Kenyan gold medalists in the grueling event, which features hurdles and water hazards to go with its 12-and-a-half laps of the track.

2020 was no different, with African athletes sweeping the medals and taking the top five spots, in fact.

His Twitter post drew plenty of love from fans back in Oshawa, with 57 re-tweets, 1,376 likes and 30 comments from well-wishers back home.

“Fantastic effort Matt. That was fun to watch.” – Brian

“Congrats on a HUGE performance. This went totally under the radar. Your 6th place finish is just as noteworthy as any medal won by a Canadian in Tokyo. You might not have a medal but you are worthy of one.” – Bruce

“Making the final? Not surprised at all. Sixth? Epic, Matt. My entire family is proud of you.” – Glenn

The comments came pouring in from others in the community as well:

“Canada is proud of you! That was an amazing race!” – Jennifer

“Congratulations!!! Making your country proud of you!” – Robin

“Congratulation! It was an impressive race! – Amy

“Congrats man, it’s been a pleasure to watch” – Rob

Even the local constabulary chimed in: