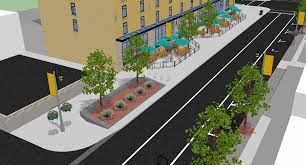 Oshawa is hoping to tap into a federal funding program designed to revitalize downtown and main streets to extend their ongoing King Street re-development program to the west side of Centre Street.

The city has been widening and beautifying the north side of its main east-west corridor through the downtown during the pandemic, with the strip between Centre Street east to Mary already complete. Now they’re turning their attention to the portion of King Street from the western edge of downtown at McMillan Drive to Centre Street and hoping the Canada Community Revitalization Fund can help bankroll the $700,000 project.

The fund, a $500 million investment from Ottawa over two years, pays 75 per cent of eligible infrastructure projects, leaving Oshawa to pay $175,000 for the work.

The streetscape project will include the widening of sidewalks to enhance pedestrian amenities and increase accessibility, as well as tree and landscape plantings and street furnishings. Project costs will also entail background design investigation costs and sidewalk and curb redevelopment.

The City will fund the remaining portion of the project through uncommitted funds in the Downtown Revitalization Reserve. If they are unsuccessful in their federal funding application, that missing $525,000 will be drawn from Civic Property Development Reserves.