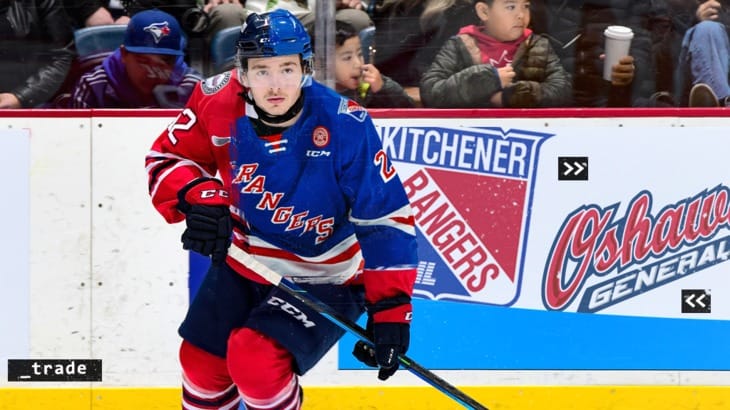 They say once a General, always a General but team captain Lleyton Moore will be finishing his prolific OHL career as a member of the Kitchener Rangers after the two clubs swung a deal Tuesday morning.

Moore heads to Kitchener for fellow overager Joseph Serpa, a second-round selection in 2024 as well as a third-round and eighth-round pick in 2025.

Named captain this year, Moore leaves the team after playing in 157 games since he was acquired from Niagara in 2019. He scored 15 goals and added a whopping 96 assists from the back end as he routinely quarterbacked the power play. He has amassed 119 points (17G, 102A) with a plus-33 rating in 185 games overall.

A first-round selection, 12th-overall, in the 2018 OHL Priority Selection, the 5’8” Woodbridge native was invited to the Arizona Coyotes development camp this past summer. He spent his youth hockey playing for the Toronto Marlboros AAA hockey club, winning the back-to-back Greater Toronto Hockey League titles in 2017 and 2018.

Serpa, a Cambridge native, was drafted by the Kitchener Rangers with the 77th overall pick in the 4th round of the 2018 OHL Priority Selection. He has played his entire career with Kitchener, spanning 146 games over four seasons. Serpa has racked up 35 goals and 69 assists in his career, including 20 points in 25 games this season. Last season he scored a career-best 69 points in 62 games, with 20 goals and 49 assists.

Serpa was an alternate captain with the Rangers.

Rangers, like Oshawa, started the season slowly but have posted four consecutive victories and have won five of their past six games to move to .500 with a 13-13 record. The Generals, meanwhile, after a dismal start have now won five straight.