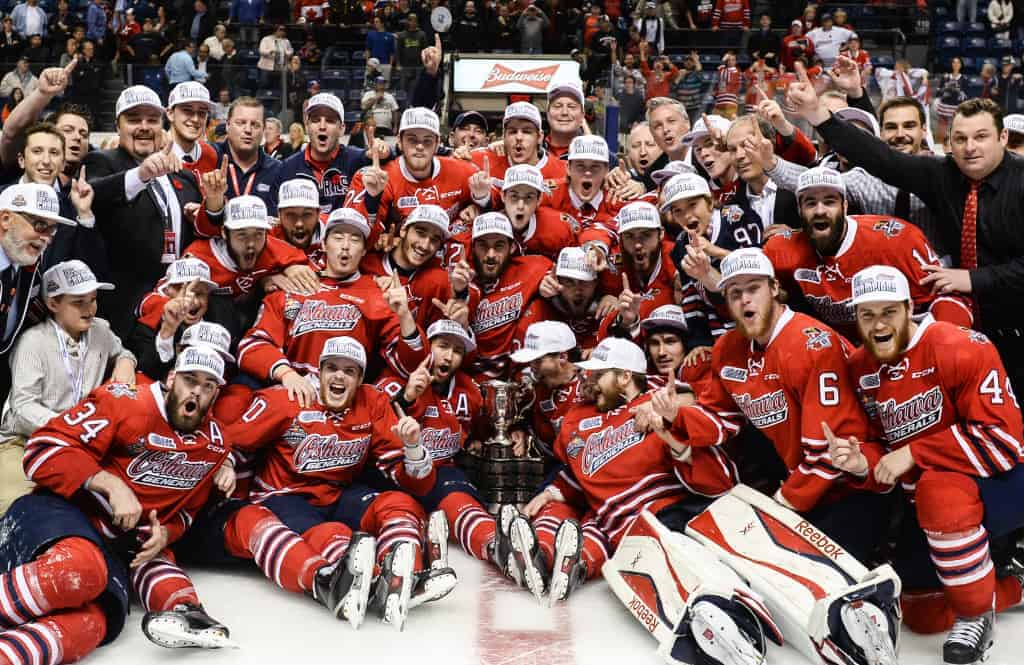 The lost season of 2020-21, as well as the lost playoffs of the previous year, impacted every team in the Ontario Hockey League, but perhaps none more than the Oshawa Generals.

The team invested heavily in one player – Phillip Tomasino – at the 2020 trade deadline, giving up nine draft picks, including six coveted second-rounders – to acquire his services from Niagara, and then saw the Pandemic roll in and cancel the playoffs, as well as the entire season that followed.

To make matter worse, Oshawa was one of two finalists (along with Sault Ste. Marie) bidding on Memorial Cup hosting rights this year, which was also cancelled.

Generals’ General Manager Roger Hunt said the toughest part of the cancelled seasons was that Generals fans were deprived of the chance to see Tomasino in action in the post-season. In the 26 games they did see him play, the Nashville Predator draft pick racked up an incredible 43 points, on his way to a 100-point season.

They did get to watch him in a Canada jersey when Tomasino made Canada’s World Junior squad last Christmas, and they were able to see him score four goals in helping the team make the gold medal game. “But they never got to see him in a Memorial Cup,” Hunt said. “That’s the worst part of it.”

Worrying about the lost draft picks now is pointless, he added.

“The draft picks are what they are,” he shrugged. “That’s the currency we have to use to get prospects.”

Hunt prefers to look at the bright side of the predicament the team finds itself in and pointed out that every team was hurt in some way by the cancelled season because many of their players aged out and are no longer eligible for junior hockey.

The group that is left, plus younger players already in the club’s system, still leaves the team in a good position, he said.

“The bottom didn’t really fall out,” he said. “You’d think it would be worse than it is, but I think we’re okay.”

The Generals have a core group of six 18- and 19-year-olds – all former first rounders – to work with, led by forwards Brett Harrison and Ty Tullio, and the team earned the number two overall spot in this past weekend’s OHL draft, which they used to select forward Callum Ritchie of the Oakville Rangers.

(Ritchie was one of 16 Rangers taken in the two-day draft, including six among the first 20 picks, and Hunt praised the Oakville Triple A team’s staff for preparing the players for junior hockey.)

Hunt admitted it was a difficult year for his scouting staff, with no hockey games to scout and only a few skills showcases and practice video to rely on in assessing players.

“There were some huge challenges,” he said. “And I have to tell you we don’t want to see a scouting period like that ever again.”

The Generals drafted 11 players in all, and after adding Matthew Buckley of the Navan Grads (Ottawa area) in the second round, they were able to select a couple of local kids in the later rounds. Aiden Carolan (12th) and Ian Gedney (13th) are both products of the Oshawa Generals minor hockey system.

“It’s not a charity. There have been some leans years lately, but this is a credit to Oshawa Minor Hockey,” he said, pointing out the organization’s Triple A Minor Midget team reached the OMHA final in 2020.

Hunt said it was frustrating this year to watch the season slip away, as league President Dave Branch tried to work out a deal for a shortened season with the Provincial government, only to see each attempt crushed by Covid-19 and lockdown legislation.

“I know Dave has always put the league and its players first,” he said. “I would have loved to have something, but there was no hockey for anybody last season.”

“In all fairness, we still can’t get a haircut, so I don’t know if this is Mr. Branch’s fault. It’s government legislation and he had to follow the rules.”

As to those lost draft picks and what they might mean to future Oshawa Generals teams, Hunt isn’t overly concerned.

“We’re not getting them back. They’re gone,” he said, adding that he expects the club to be competitive every season, regardless of their drafting position. “We’re just going to have to build from within and figure out another way to win.”

While it seems unlikely the team would be in a position to bid once again on the Memorial Cup when the league’s turn comes around in two years, Hunt isn’t ruling anything out.

“We have a good staff here and we expect to always be in contention.”